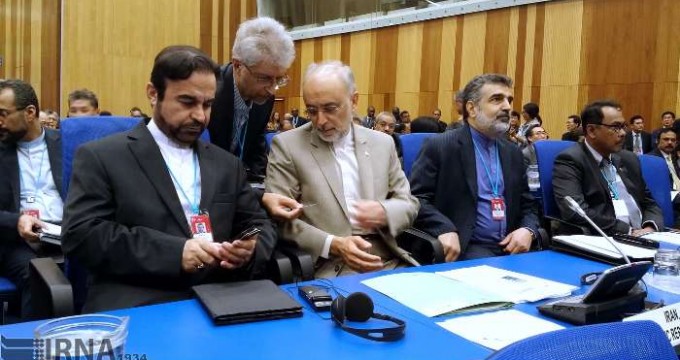 Vienna, Sept 14, IRNA — Iranian Vice-President and Chairman of the Atomic Energy Organization of Iran Ali Akbar Salehi said in his speech to IAEA General Conference on Monday that Islam and the Fatwa of the Supreme Leader have forbidden Weapons of Mass Destruction (WMDs).

He said that based on the statute, the IAEA has a major responsibility to promote nuclear energy for peaceful uses throughout the world and the current General Conference provides best opportunity for sharing and exchanging views on this issue.

‘In light of our Supreme Leader’s fatwa (decree) on the illegitimacy of production, deployment and use of weapons of mass destruction including nuclear weapons, my country has always and invariably pursued the path of peaceful nuclear technology and constructive engagement and mutual respect.’

He said that Iran joined the historic negotiations which gathered pace by the election of President Rouhani in June 2013 with the objective of exercising its rights in peaceful nuclear technology.

‘Now, I have the honor to announce that Iran and the P5+1 countries, after about 23 months of hard and intensive negotiations, have reached an agreement manifested in the Joint Comprehensive Plan of Action (JPCOA) in July 14th, 2015.’

The message conveyed by this agreement to the world is that neither the imposed sanctions nor military threats have had any effect on the will of the Iranian nation. The agreement opens a horizon to new opportunities and is a step forward by the involved parties to end a contrived and unnecessary crisis that has been deliberately prolonged for more than a decade.

Furthermore, signing a road-map between the Islamic Republic of Iran and the IAEA based on cooperation and dialogue in July 14, 2015 is yet another sign of the firm determination of my country to undertake actions regarding the resolution of outstanding issues.

As the Islamic Republic of Iran, in realization of its voluntary confidence building measures and practical steps taken, is committed to its undertakings under the JCPOA and the Road-map we likewise expect the IAEA and the P5+1 to reciprocate through impartial and objective conclusion of the ongoing process and removal of the unjust sanctions, respectively. By doing so, their good intention and trustworthiness is revealed to the world community. Undoubtedly, the wide support of all peace-loving nations around the world will expedite the process.

In accordance with the United Nations Security Council Resolution No. 2231, Iran has been acknowledged as a State possessing peaceful nuclear technology including full fuel cycle and the right to enrichment, while preserving all its existing nuclear infrastructure. In this session of the General Conference, which also coincides with Iran’s nuclear deal, I would like to make known our readiness for extended international cooperation with other Members in all fields of peaceful uses of nuclear energy with priority based on nuclear safety within the existing IAEA regulations.

Based on the norm of mixed energy planning and taking into account the national electrical demands and the climate changes phenomenon, the Islamic Republic of Iran has already taken significant steps in the field of developing peaceful nuclear technology. It is worth mentioning in this regard the safe and secured operation of Bushehr Power Plant; Thanks to the effective assistance received from the Technical Cooperation of the IAEA.

At the moment with the production of 13 TWh nuclear electricity output, the safety achievement report issued by the World Association of Nuclear Operators (WANO) in the years of 2011 and 2015 for Bushehr Power Plant has been evaluated as positive. We are expecting the Agency’s expert assessment of Bushehr’s safe performance within the framework of Pre-OSART activity in 2016 and the Operation Safety Review Team (OSART) in 2017.

As previously noted earlier in our statements, nuclear and radiation safety have the highest priority in my country. In this context, based on the longstanding policy of the Islamic Republic of Iran on creating a peaceful and friendly environment in the region, specifically the Persian Gulf neighboring countries, we suggest that a mechanism of regional cooperation in the field of nuclear and radiation safety and emergency preparedness be created so as to enhance necessary confidence and transparency among the countries in the region.

Although, nuclear security issue is among the rights of nations’ sovereignty, but the assistance rendered by the Agency to the Member States is instrumental in the strengthening and the promotion of nuclear security regime. As such the Agency’s central and pivotal role in establishing a relevant supportive body is vitally important.

Since good implementation of a devised security regime requires a set of guiding documents, therefore it is strongly recommended that the drafting, compiling and revising of such documents be carried out through participation of all Member States in Nuclear Security Guidance Committee (NSGC).

My country, while condemning the cyber-attacks against the nuclear facilities, once again expresses its concern over the probable leak of confidential information.

I would like to add that the State Level Concept (SLC) in safeguard is still ambiguous and its implementation should not contradict the NPT and disrupt the rights and obligations of the Member States in a prejudiced and discriminatory manner. Inspections by the IAEA should be carried out in such a way so as to devoid intervention in domestic military and national security affairs.

By the same virtue, the Islamic Republic of Iran in the framework of paragraph 13 of JCPOA intends to fully implement the additional protocol in due time, as a gesture of good intention and for the sake of confidence building.

Based on its principles and religious tenets, Iran as great supporter of global disarmament efforts according to the NPT, disapproves the production, accumulation and deployment of nuclear weapons as inhumane and uncivilized. Again, being a proponent of global disarmament we urge the Nuclear Weapon States to uphold their commitments to meet their obligations envisaged in article 6 of NPT. This issue is also endorsed in Tehran Disarmament Conference in August 30th, 2012.

It is indeed sad to still witness that after the elapse of about half a century the Nuclear Weapon States have not yet realized their commitment on disarmament.

Establishment of Nuclear Free Zone in the Middle East region is of vital importance. This idea was initiated by Iran in 1974 and has been reiterated in the Non-Proliferation Treaty (NPT) resolution of 1995 as well as 2010 NPT action plan.

Israel which has not acceded to the NPT, is indeed the biggest obstacle in the implementation of this plan and considered to be a serious threat to the region’s security. Iran is also deeply concerned about the current trend of incubated terrorism in the region and warns of threats derived from their possible use of radiological dirty weapons. In case of any complication arising from this menace, the countries involved in providing such groups with financial or material support should be held responsible and responsive.

With the elapse of almost 60 years since the creation of IAEA, promoting the efficiency and effectiveness of IAEA decision making process by the realization of balance between the Board of Governors and the General Conference as well as revising the membership issue in the Board of Governors is an essential necessity. In order to respond to the legal and technical expectations of the Member States, the time has come for the IAEA to take constructive steps in this regard.

As I alluded in the past, the rationale of power of logic and reasoning is a wise substitute for the logic of power which has unfortunately been chronically dominant in the international arena.

JCPOA is a lucid example in this respect and I hope to witness a world in future enriched with prosperity, peace and security for the entire humanity.