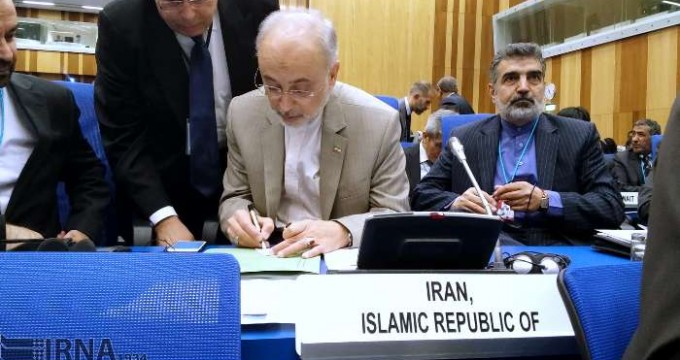 Iran says both its recent nuclear agreement with six world powers and a roadmap signed between Tehran and the International Atomic Energy Agency (IAEA) entail reciprocal measures that should be observed “objectively” by both sides.

Iranian Vice-President and Chairman of the Atomic Energy Organization of Iran Ali Akbar Salehi said in his speech to IAEA General Conference on Monday that Islam and the Fatwa of the Supreme Leader have forbidden Weapons of Mass Destruction (WMDs).

No plan to close Iran Embassy in San’a: Diplomat

Deputy foreign minister for Arab and African affairs announced here Monday that Iran has no plan to close its embassy in the Yemeni capital of San’a.

Iran could become major supplier of natural gas to EU

Iran could become a major supplier of natural gas to the European Union by the end of the next decade, according to new estimates from the bloc’s executive following the nuclear deal reached with Tehran this summer.

Iranian Parliament Speaker said Saudi Arabia should have adopted proper measures to protect Hajj pilgrims, and underlined that Saudi government’s negligence was the main cause of the incident.

Iran has projected average oil prices at $42 to $50 per barrel in a draft budget bill for the year to March 2017, a government spokesman was quoted as saying on Monday, expecting crude to stay in the current trading range.

Iranian President Hassan Rouhani has wished a happy new year for the Jewish community all over the world.

The head of Iran’s nuclear agency says the deal his country struck with six world powers over its nuclear program showed Iran’s resistance to pressure and threats.