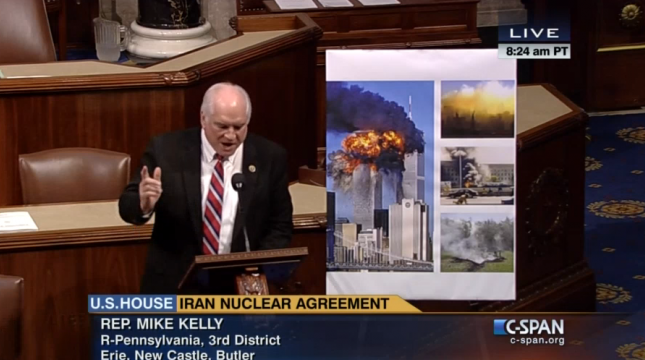 Friday’s House vote to approve of the international accord to curtail Iran’s nuclear program coincidentally falls on the fourteenth anniversary of the Sept. 11 attacks. While speaking on the floor against the deal, Kelly stood next to a poster of the World Trade Center and the Pentagon burning on Sept. 11.

“Do not sacrifice the safety, the security, and the stability of 300 million Americans for the legacy of one man,” Kelly implored.
But a few minutes later, Rep. Joe Crowley (D-N.Y.) called Kelly’s use of rhetoric invoking Sept. 11 a “disservice” to debate on the Iran deal.

“I think he did a disservice to the House and to this debate by bringing up the issue of 9/11. I do thank him for his honesty, for at least showing that’s what this is all about. Having this debate today and this vote today to stir the emotions of the American people,” Crowley said.

Crowley, whose New York City district includes Queens, recalled the personal impact 9/11 had on his life.

“My emotions always stir on this day. Fourteen years ago, I knew people who died that day. My cousin died. My friends died. I don’t need to be reminded of that. But it will not cloud my decision making on this important issue,” Crowley said.

The resolution approving the Iran deal is expected to fail later Friday since all Republicans, as well as a handful of Democrats, oppose the deal. But the deal is nonetheless expected to go into effect because Republicans do not have a veto-proof majority in opposition to the Iran accord.