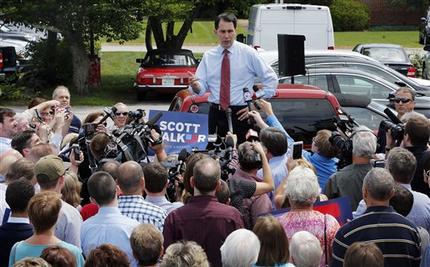 Scott Walker: US should not accept more Syrian refugees

US Republican presidential candidate and Wisconsin Governor Scott Walker says the United States should not allow Syrian refugees to enter the country.

Walker clarified his position after refusing to address the question when asked about it in New Hampshire earlier this week, Wisconsin Public Radio reported Wednesday.

He told reporters during a business summit in Eau Claire, Wisconsin that Washington should focus on dismantling the Daesh (ISIL) terrorist group to solve the refugee crisis in Syria.

“No, we shouldn’t be taking on any more Syrian refugees right now,” he said. “In the last year, America has received almost 70,000 refugees, of which nearly 2,000 are from Syria.”

“So, we’re doing more than any country in the world and it’s got to be clear that the problem that has to be addressed is not the refugee issue that’s a symptom, the real problem is this (Obama) administration fails to deal with taking on ISIL,” added Walker.

The presidential hopeful made the comments as Europe is dealing with its worst refugee crisis since World War II.

The unprecedented refugee crisis in Europe escalated over the summer amid the ongoing wars in Syria and Iraq.

The continent is now divided over how to deal with the flood of people, mainly Syrians fleeing the war in their homeland.

Syria has been facing a foreign-backed militancy since 2011. The violence has also forced over four million Syrians to take refuge in neighboring countries, including Jordan and Lebanon. More than 7.2 million others have been displaced internally, according to UN figures.

According to UN estimates, 300,000 people have left the Middle East and Africa so far this year for a better life in Europe.