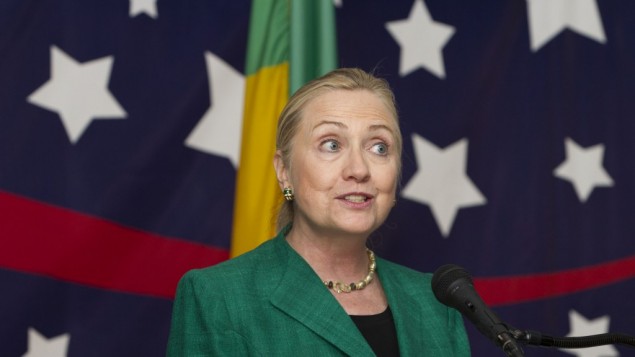 Clinton stirs up old difference with Obama on foreign policy

In a speech on Wednesday, the Democratic presidential candidate once again positioned herself as the hawkish alternative to the president, her one-time campaign rival, on a series of international issues – starting with Iran.

While offering her strong support for the landmark nuclear agreement with the Islamic nation, the former secretary of state lined her praise with skepticism about the intentions and trustworthiness of the longtime U.S. enemy.

“My starting point will be one of distrust,” she said. “We should anticipate that Iran will test the next president. They’ll want to see how far they can bend the rules. That won’t work if I’m in the White House.”

While none of Clinton’s views is new, her assertive remarks are nonetheless notable in a campaign in which there is little daylight between her and Obama on domestic issues such as the economy, his landmark health care plan and immigration.

Clinton aides said the speech represents the opening of a more aggressive phase of the campaign, during which she plans to sharpen the contrast between her deep expertise in foreign policy and that of her potential Republican opposition.

The strategy won’t be easy. Clinton wants to take credit for the foreign policy victories of the Obama administration – she was, after all, the nation’s top diplomat during Obama’s first four years in office. At the same time, she’s trying to insulate herself against Obama’s critics by casting herself as more assertive than the president she served.

It’s an argument aimed squarely at voters in the general election. Clinton is betting that her ability to speak with authority and in detail will win out over the bombastic rhetoric of Donald Trump and other potential Republican opponents.

An example came Wednesday. Trump slammed the deal during a Capitol Hill rally as the product of “very, very stupid people” and promised that “we will have so much winning if I get elected, that you may get bored with winning.” A few hours earlier, Clinton talked tough by detailing the need to sell F-35 fighters to Israel and help the Jewish state implement better use of tunnel detection technology.

Her remarks, said Clinton campaign aide Christina Reynolds, “provide a pretty important contrast with the Republican field in terms of serious answers about problems like this versus a lot of talk without real solutions.”

That’s a distinction Clinton wants to make even as she stands with Obama to support the deal with Iran. A new Pew survey released on Tuesday found that just 21 percent of Americans approve of the deal – a 12-point drop since mid-July.

To address those skeptics, Clinton offered a series of veiled critiques Wednesday of Obama’s policies across the globe.

When asked about relations with Russia, led by President Vladimir Putin, she replied that she wanted a bolder approach from the U.S. to “up the cost on Russia, and in particular, on Putin.”

“I think we have not done enough. I am in the category of people who wanted us to do more in response to the annexation of Crimea and the continuing destabilization of Ukraine,” she said.

She promised to be the best friend of Israel, implying, perhaps, that Obama had been a little less than a stalwart ally. “To the people of Israel, let me say – you’ll never have to question whether we’re with you,” Clinton said.

And she made a passing reference to places where she’d previously split with the Obama administration, saying she would have given more support for Iranian protesters during the “green revolution” in 2009 and armed the moderate Syrian opposition.

But while enough Democrats in Congress support the Iran deal to ensure its adoption, her hawkish approach could still turn off some liberals. Vermont Sen. Bernie Sanders, Clinton’s main rival for the Democratic nomination and a supporter of the Iran agreement, referenced his vote against authorizing the war in Iraq while speaking Wednesday on the Senate floor. Clinton voted in favor of the war, something she has said she regrets.

“Sadly, much of what I feared in fact did happen,” Sanders said. “I do not want to see it happen again.”

And while Obama has derided critics of the Iran deal as warmongers, Clinton was careful to say that she respects the skeptics. “We simply have to find a way to work together better than we have been doing,” she said.

As would be expected, Republicans aren’t willing to give Clinton any quarter as they frequently cast the Iran deal as a plank of an “Obama-Clinton foreign policy.” As secretary of state, she sent a top adviser to participate in secret meetings with Iran that started the international negotiations that led to the agreement.

“Hillary Clinton’s central role in crafting this dangerous agreement is one of the many examples of her failed record as secretary of state,” said Republican National Committee Chairman Reince Priebus in a statement. “Voters will have no choice but to hold Hillary Clinton accountable at the ballot box next year.”