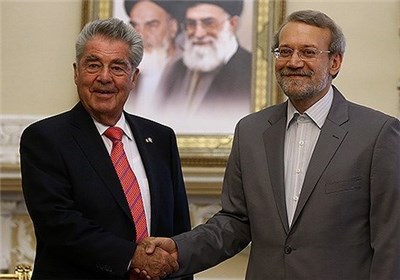 “Iran has always had friendly and growing ties with Austria and there has been close cooperation between the two states in political, economic and trade fields,” Larijani said in the meeting held in Tehran on Tuesday.

“The Iranian parliament backs the promotion of bilateral relations in various areas,” he stressed.

Larijani further expressed the hope that Fischer’s current visit to Iran would mark a milestone in the new horizon of Tehran-Vienna cooperation in diverse areas.

The Austrian president, for his part, emphasized that his official visit to Iran is a clear sign of Vienna’s willingness to promote mutual cooperation with Tehran in various spheres.

He also pointed to a recent nuclear agreement reached between Iran and six world powers after weeks of intensive talks hosted by the Austrian capital of Vienna, and said now the time is ripe for closer economic cooperation between the two countries.

Heading a high-ranking delegation of Austria’s economic, scientific and cultural officials, Fischer arrived in the Iranian capital of Tehran on Monday afternoon for an official three-day visit.

He is the first head of a western state visiting Iran for many years.

The visit comes against the backdrop of a new wave of renewed interest in ties with Iran after Tehran and the Group 5+1 (Russia, China, the US, Britain, France and Germany) on July 14 reached a conclusion over the text of a comprehensive 159-page deal on Tehran’s nuclear program.