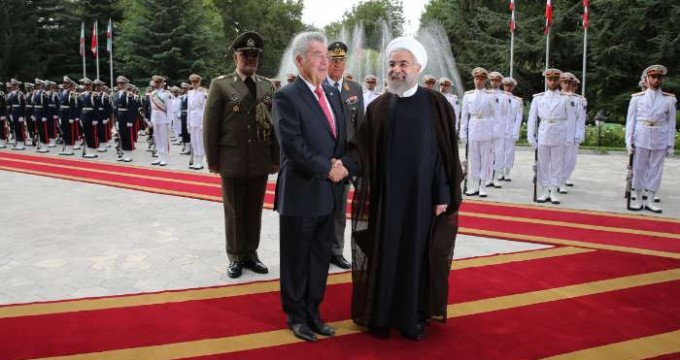 Iranian and Austrian presidents started their meeting to confer latest regional and international developments after the welcome ceremony.
Austrian president arrived in Tehran yesterday evening leading a delegation consisting of 130 Austrian companies.
Fischer is the first European head of state to visit Iran following the successful conclusion of nuclear talks between the Islamic Republic and the P5+1.
A statement by the Austrian Presidency on Friday said Fischer will be on an official working visit to Tehran from September 7 to 9.
An economic delegation is accompanying Fischer in his trip who comprises representatives of more than 130 Austrian companies to take advantage of Iran’s new atmosphere after the removal of sanctions.
Austria’s Foreign Minister Sebastian Kurz as well as Vice Chancellor and Economy Minister Reinhold Mitterlehner accompany Fischer in his trip to Tehran.