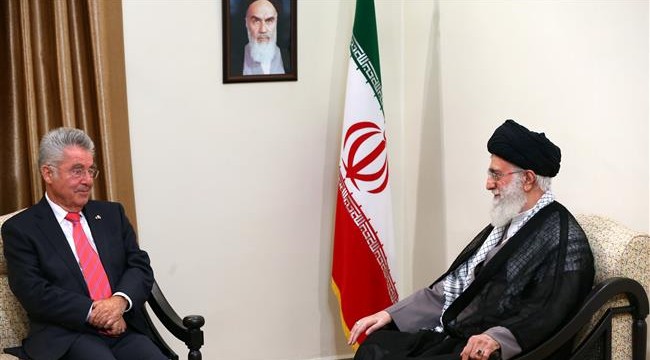 Leader of the Islamic Revolution Ayatollah Seyyed Ali Khamenei describes as “unwise and unjustifiable” some European states’ adoption of hostile US policies against Iran.

“Some European countries’ following the US is unwise and groundless. Of course, Austria is not one of these countries,” the Leader said in a meeting with visiting Austrian President Heinz Fischer in Tehran on Tuesday.

The Leader added that the US is hostile against Iran because it lost its interests in the Islamic Republic after the victory of the Islamic Revolution in 1979.

“The Islamic Revolution took Iran, which was fully under the Americans’ control, from them and this issue is the reason behind the US hostility against the Islamic Republic,” Ayatollah Khamenei said.

The Leader called on Iranian and Austrian officials to devise plans and follow up on them in order to enhance bilateral ties.

He said the main goal of the Islamic Revolution is to bring prosperity and happiness to the Iranian people and all humans under the aegis of “following the divine path, rule of wisdom and faith together with action.”

Ayatollah Khamenei emphasized that Iran’s “benevolent approach” has won the country enemies who are after warmongering and are seeking to pit nations against one another.

However, Iran has plenty of good and kind friends among governments and nations, the Leader said.

In response to a question by the Austrian president about the future of ties between Iran and European countries, the Leader said, “Certain remarks have been made on the part of the European governments, but we should wait for the practical effects of these remarks.”

The Leader further pointed to deviant movements operating in the name of Islam in the Middle East region, saying: “Islam is not what these [deviant] currents are introducing, but Islam stands on a strong, faithful and wise basis.”

During the meeting, which was also attended by Iran’s President Hassan Rouhani, the Austrian president assessed as good his negotiations with Iranian officials.

Fischer said the two countries should hold more dialogue on the issues of mutual interest to finalize agreements.

The Austrian president added that he had held good talks with the Iranian president and expressed optimism about the prospect of mutual relations between Tehran and Vienna.

He said a new opportunity has been created for Iran and Austria to improve cooperation.

The Austrian president held a separate meeting with the speaker of Iran’s parliament (Majlis), Ali Larijani, earlier in the day.

During the meeting, Larijani expressed hope that Fischer’s current visit to Iran would open new horizons in Tehran-Vienna cooperation in political and economic fields.

He added that Iran’s Majlis supports the expansion of mutual relations.

The Austrian president, for his part, said his trip clearly indicates Vienna’s willingness to strengthen cooperation with Iran on various regional and international issues.

The time is ripe for the two countries to make use of their potential to boost economic cooperation in line with national interests following the conclusion of a nuclear agreement between Iran and the P5+1 group of countries in mid-July.

On July 14, Iran and the P5+1 countries – the United States, Britain, France, China, Russia and Germany – finalized the text of a nuclear agreement, dubbed the Joint Comprehensive Plan of Action (JCPOA), in the Austrian capital of Vienna.