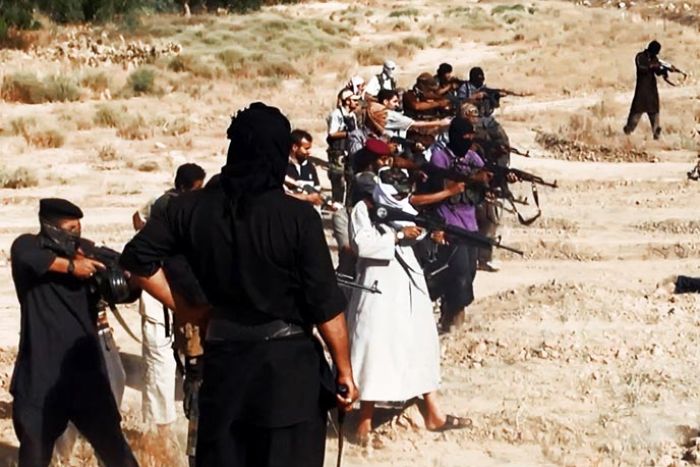 For ISIS terrorist group the psychological warfare is overarching in a way that it is not less important than a conventional warfare, and the group calls the media and propagandistic work as half part of Jihad.

ISIS is in desperate need of media propaganda to present an intimidating picture of its forces when attacking an area. Psychological warfare has helped the group to gain control over big and populous cities and wide territories. Holding a campaign of terror beside intimidation of the people of the target places are part of psychological warfare. ISIS is following them as major tactics in Iraq and Syria, a pathway taken because the army and public mobilization forces of the attacked countries outnumber the terrorist group’s forces.

The ISIS group to intimidate and terrorize its adversaries uses a set of ways which include cold-blooded mass killings, suicidal operations in public places, airing propaganda videos of beheading the victims and street explosions. The terrorist group has also other tactics in its agenda to influence the minds of people that include infusing a sense of terror, fabricating news about its gains and advances and highlighting and exaggerating its operations as massive to spread false news about its military potentials as well as create heroic pictures for its military commanders. ISIS has used all of these tactics as part of its psychological warfare campaign in Syria and Iraq.

Moreover, ISIS posts ferocious propaganda videos online, videos containing scenes of beheading the victims, massive killings as well as other videos depicting the group’s parades in front of their defeated opponent forces and people of the cities which the group claims as part of its realm of caliphate.

ISIS follows a curiously and precisely planned policy concerning creating an air of intimidation. The group chooses what it posts on such websites as YouTube and Twitter very meticulously. The videos and pictures posted online are precisely chosen, aiming to leave a deep impact on the targets’ minds, and in the same time they are intended to scare the opposing sides and draw the other extremist and terrorist groups’ affirmative responses and admirations.

Their major propaganda videos made in the heart of the deserts that contain beheading victims who the terrorist group considers as “apostates and atheists”. These videos all fall within a broader policy of strengthening the ISIS’s picture in the people’s minds and terrorizing them, a policy that has been relatively successful, and has brought the group gains and advances. As it is seen in some operations, ISIS with the use of “victory through terror” policy has managed to make progresses without engaging in a direct fighting in Syria and Iraq. ISIS believes that its victories in battlefields are results of a terrorizing media campaign launched against its opponents.

Finally, another area where the terrorist group ISIS has been victorious in is social media in which fabrication of the news and deceiving the public opinions have led to considerable gains in the conquered Iraqi provinces without involvement in conventional warfare.

In addition to operating its media wings, ISIS draws on the biased coverages of some of Arabic satellite channels which are run by petrodollars of their states. These Channels distort the truth and ignite hostility and violence against some regional forces, while they paint hostile forces as friends. They deliberately or unconsciously help fuel and spread widely the extremism in West Asia, as they support and whitewash the terrorist and takfiri groups’ crimes and atrocities.