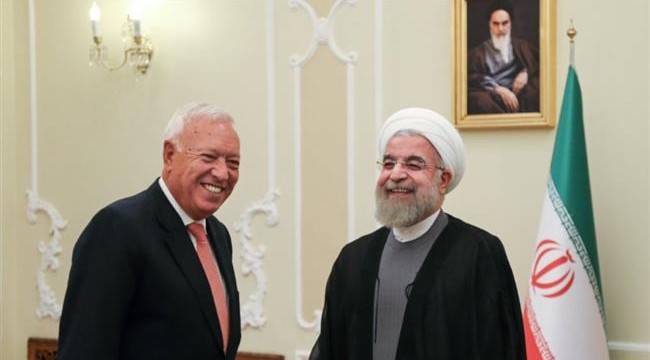 “Under the new circumstances and following the Vienna agreement [clinched between Iran and six world powers over Tehran’s nuclear program], Tehran welcomes the presence of foreign investors and entrepreneurs [in the country], and Spanish companies can enter the Iranian market as well, “ said Rouhani in a meeting with Spanish Foreign Minister Jose Manuel Garcia-Margallo in Tehran on Monday.

On July 14, Iran and the P5+1 countries – the United States, Britain, France, China and Russia plus Germany – finalized the text of a nuclear agreement dubbed the Joint Comprehensive Plan of Action (JCPOA) in the Austrian capital, Vienna.

Iran also enjoys numerous potentialities in the areas of energy, oil and natural gas, downstream industries, infrastructure, and academic matters as well as cooperation between research and tourist centers, said the Iranian president, who noted that the presence of Spanish investors and entrepreneurs in Iran can give fresh impetus to cooperation between the private sectors of both sides.

President Rouhani also said he would like to see a direct air route be established between Tehran and Madrid.

Elsewhere in his remarks, the president hit out at the development of nukes, saying, “Nuclear weapons have never ensured security for countries.”

He then said Iran stands ready to work closely with Spain at regional and international levels, including in the war on terrorism.

“Today, the Middle East region is facing the major scourge of extremism, violence and terrorism, but this scourge will never stay limited to a single region or a single territory,” said President Rouhani.

He urged all countries to join a global campaign against terror.

The visiting Spanish foreign minister, for his part, expressed hope the sanctions imposed on Iran will be lifted as soon as possible.

He noted the two countries have common ground when it comes to dealing with terrorism, stressing the need to work out political and peaceful solutions to regional crises, including the conflict in Syria.

Spanish firms are eager to set up shop in Iran, the foreign minister underscored.

He said Spain can serve as a conduit for the transfer of Iran’s natural gas to Europe, and expressed hope the establishment of a joint Iran-Spain cooperation commission will see  the full existing potential for mutual cooperation be tapped.

During the meeting, Larijani highlighted the fact that Iranian people do not have a negative impression of Spain as a Western government, saying such a positive background can be used to tap into the potential for cooperation between the two countries.

The top Iranian parliamentarian also called for more engagement between legislators of the two countries as they can improve mutual understanding between the two sides and facilitate bilateral collaboration.

Garcia-Margallo, for his part, hailed Iran’s major role in establishing peace and security in the Middle East region, saying Spain is seeking to be one of the first countries to implement its cooperation plans with Iran as soon as the international sanctions on the country are lifted.