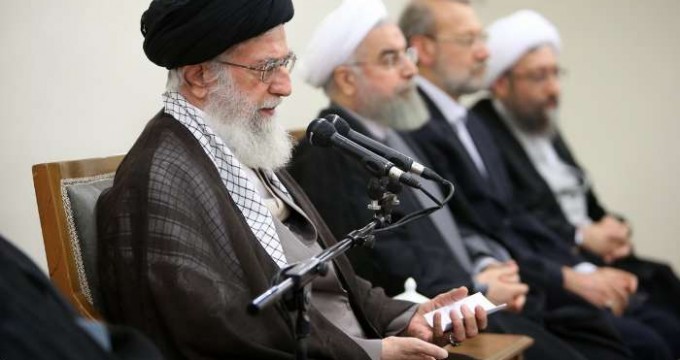 Tehran, Sept 7, IRNA – Supreme Leader of Islamic Revolution Ayatollah Seyed Ali Khamenei on Monday called on the new members of the Supreme Council of Cyberspace (SCC) to rid cyberspace of passivity through using talents of the youth and adopting calculated measures.

‘Using capability and talents of the country’s youth and through making right policies and adopting well-calculated and coordinated measures and without losing time, let’s move towards ridding the cyberspace of passivity and having active, influential presence and production of reliable and attractive Islamic content,’ said the Supreme Leader in a meeting with Head of the SCC, President Hassan Rouhani, and members of the Council.
Referring to the wide-scale impact of cyberspace, as an extraordinary soft power on various fields, such as culture, politics, lifestyle, faith, religious ideology and morals, Ayatollah Khamenei underlined appropriate and careful designs to guarantee intellectual and ethical security of the society in the field.
The requisite for active and influential presence in the cyberspace is concentration on the decision making, seriousness in execution without wasting time, coordination among organs and avoiding parallelism and confrontation, concluded the Supreme Leader.
He also underlined that planning and support of government, especially the Scientific and Technological Department of the Presidential Office, for expansion of the Information Technology (IT) is highly necessary.
He emphasized that expansion of the industries through the knowledge-based companies will have drastic impact on employment and development in the country’s economy.
The Supreme Leader also thanked President and former members of the SCC as well as current and former secretaries of the Council for their efforts.
Prior to the Supreme Leader’s speech, President Rouhani and the SCC Secretary Mohammad Hassan Entezari provided the meeting’s participants with a report on importance of the cyberspace and the plans and measures of the SCC during the first term.
Also Judiciary Chief Ayatollah Sadeq Amoli Larijani offered the audience guidelines on exigencies of the cyberspace.