A look at Iranian newspaper front pages on September 7

The comments of the president at separate meetings with the Hungarian and Iraqi ambassadors to Tehran dominated the front pages of Iranian newspapers on Monday.

Ettela’at: President Rouhani has urged Europe to live up to its historic duty to help refugees.

The president made the call at a meeting with the new Hungarian ambassador to Tehran.

Highlights of Ettela’at newspaper on September 7 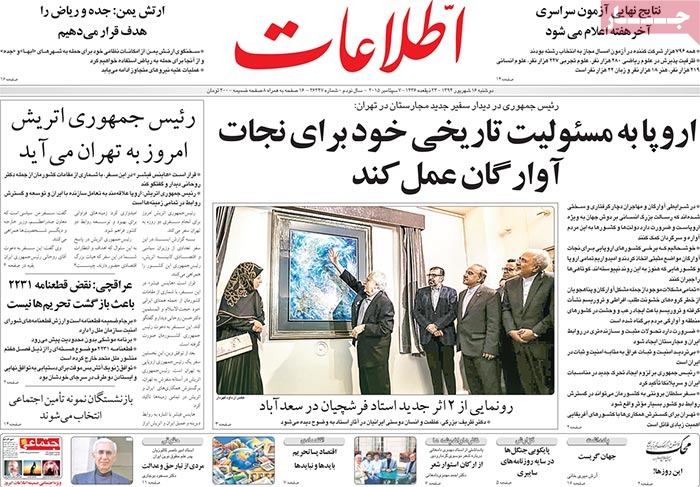 Abrar: The deputy commander of the Army has said that the Army has achieved all its set goals in a recent military exercise it held. 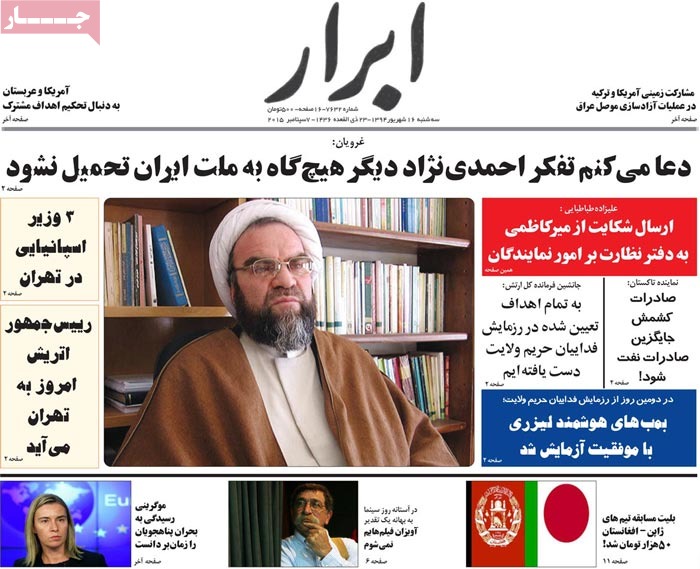 Afarinesh: American and Turkish ground troops will take part in operations to liberate the Iraqi city of Mosul. 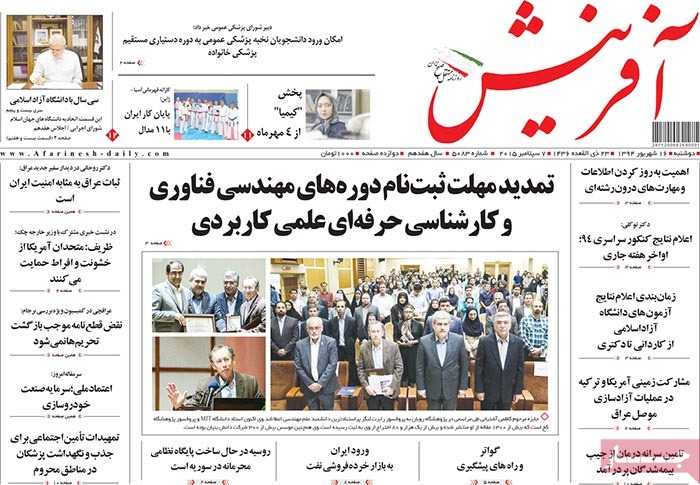 Aftab-e Yazd: “IRIB has time to air cheerios commercials, but does not have time to allocate to Baidinejad [an Iranian nuclear negotiator],” Kamaladin Pirmoazzen, a reformist MP, said [as he lashed out at the national broadcaster]. 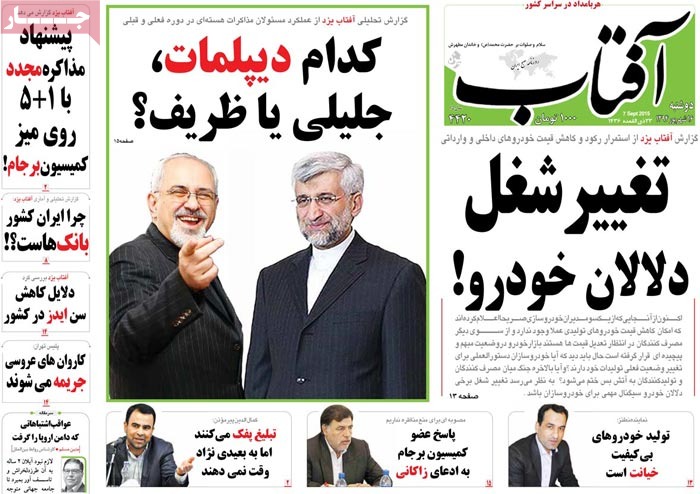 Akhbar Sanat: The Iranian economy minister has said that Iran-Iraq trade can rise to $20 billion.

Akhbar Sanat: Iran will no longer need to import meat in five years. 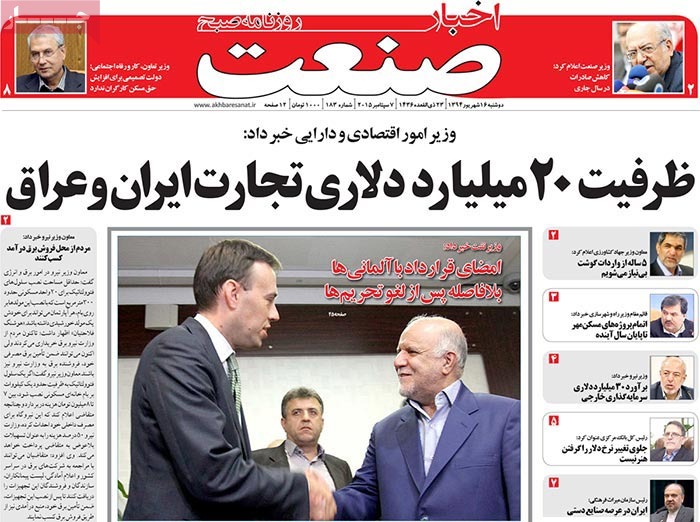 New legacies of the Pasteur Fund [which was set up by the former president] pop up by the day. 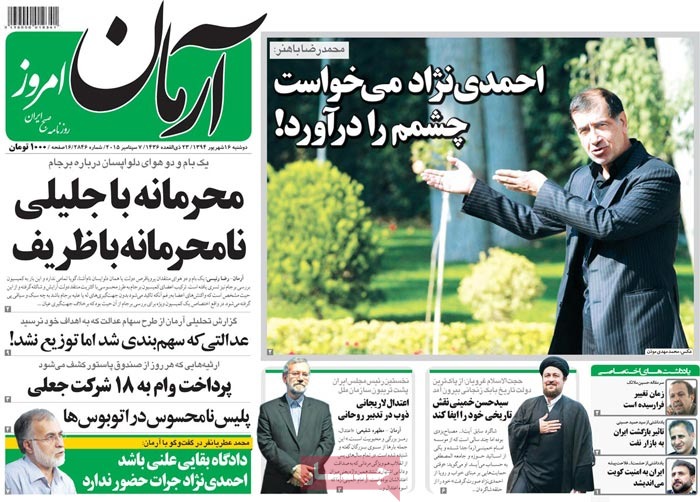 Asr-e Rasaneh: Addiction is among the top five causes of death in Iran. 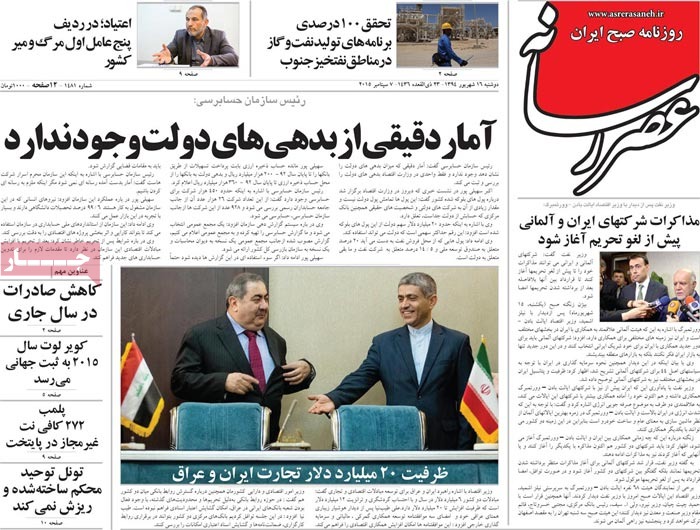 Asrar: Mohsen Gharavian, a Qom Seminary teacher, has lashed out at Ahmadinejad and his government by saying: “The most immaculate government of history produced Babak Zanjani [a billionaire who stands accuse of massive corruption]!”

He further said Ahmadinejad should have been impeached and voted out of office. “I am a principlist, but I have disavowed hardliners.” 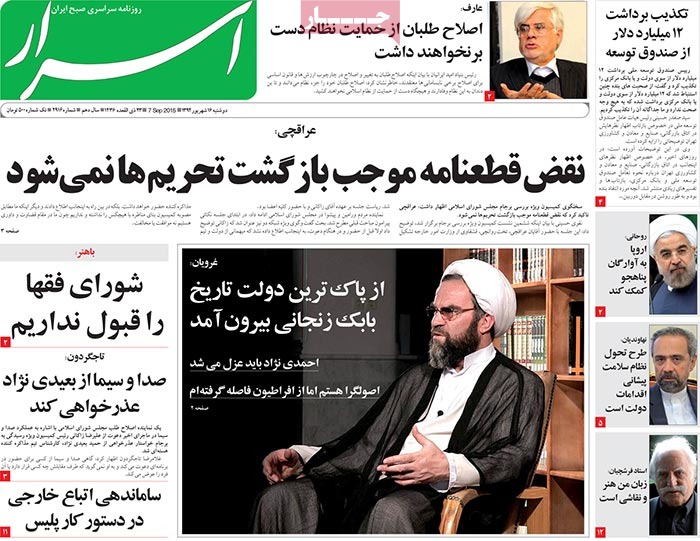 Ebtekar: The director of the National Development Fund has criticized media for misquoting him.

Safdar Hosseini said the governor of the Central Bank is a skilled manager with a strong work ethic.

He also denied that the Central Bank has withdrawn $12 billion from the fund. 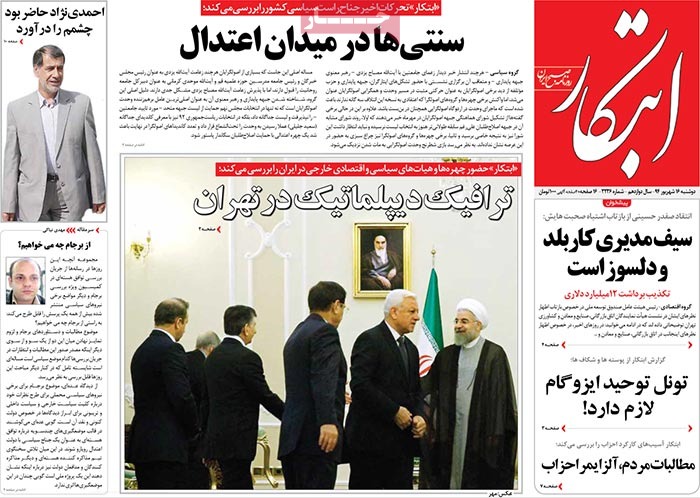 Emtiaz: “The age of developing AIDS in Iran has slipped,” said Mohammad Mehdi Gooya, the director-general of the Health Ministry’s Department for Communicable Diseases. 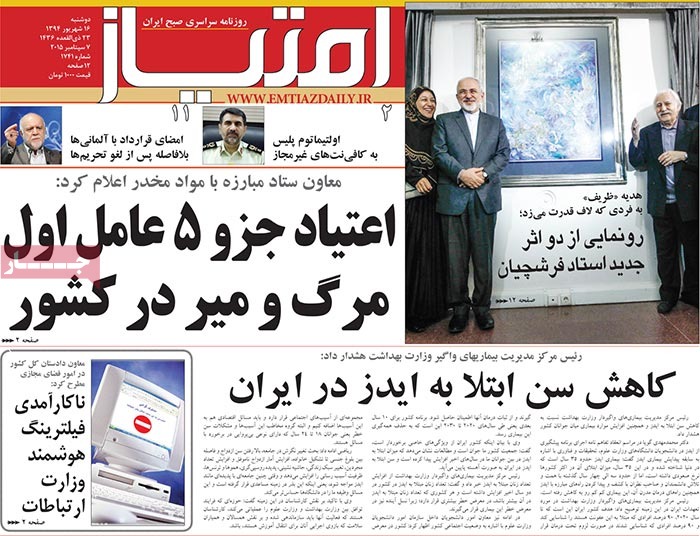 Etemad: “How dare you slam reformists as seditionists?” Mohammad Reza Aref said in comments aimed at “those who have secured a bully pulpit thanks to the Islamic Revolution.”

The research center of the Guardian Council has said that the nuclear deal should be reviewed and approved by the Islamic Consultative Assembly. 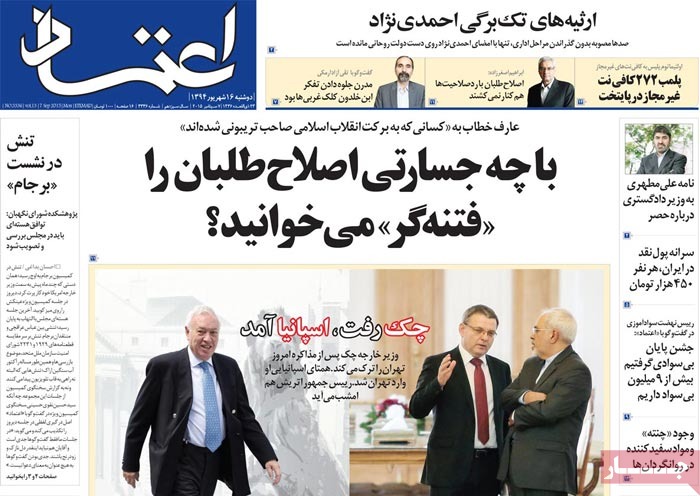 Hemayat: More than 270 unauthorized Internet cafes have been shuttered in the capital. 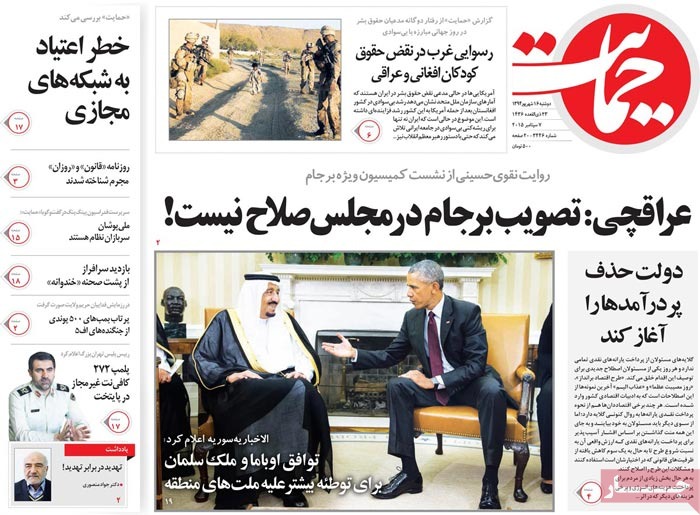 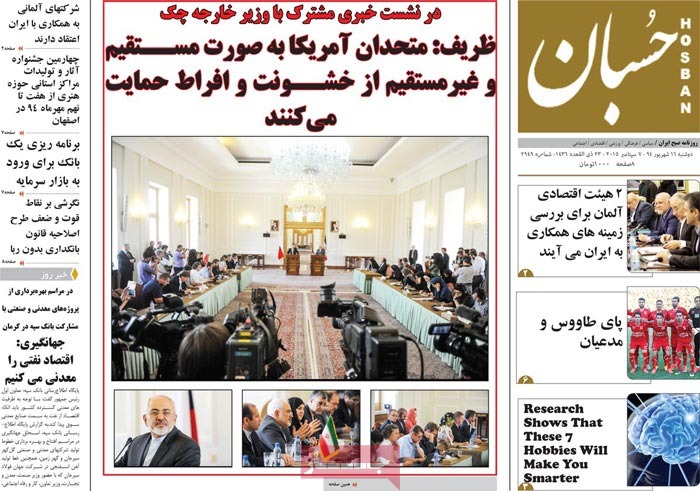 Iran: The Austrian President has published an opinion piece [in Farsi] in Iran daily. 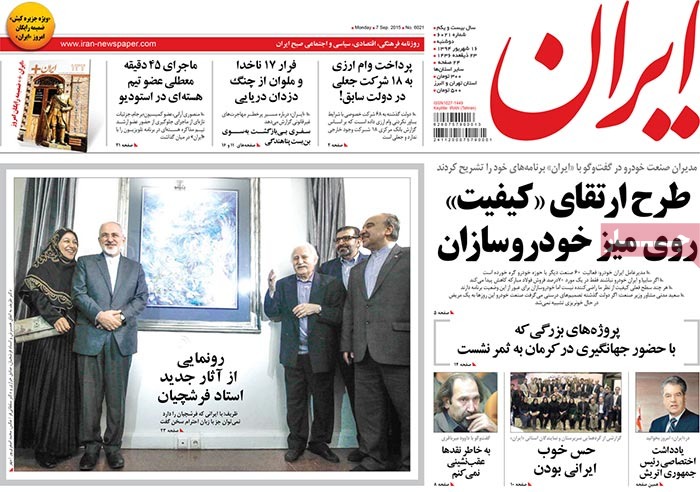 Jomhouri Islami: The families of Saudi military personnel have staged a rally in protest at deployment of their loved ones to Yemen. 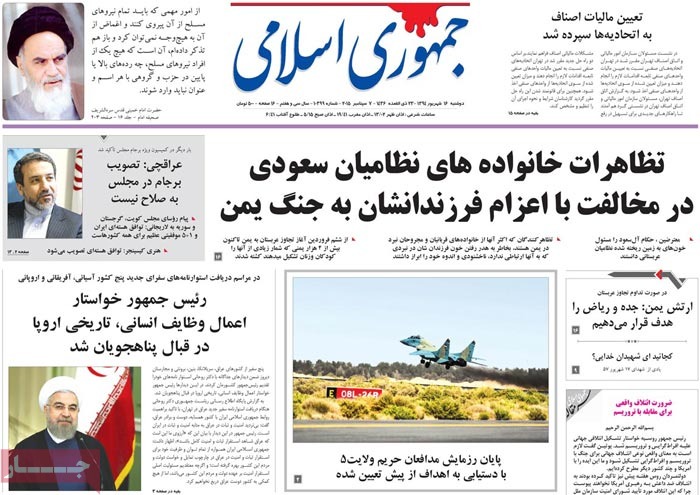 Kayhan: The daily says formation of a committee to review the Iran nuclear deal in parliament won’t settle the problem; the government should present the deal to the legislature in the form of a bill. 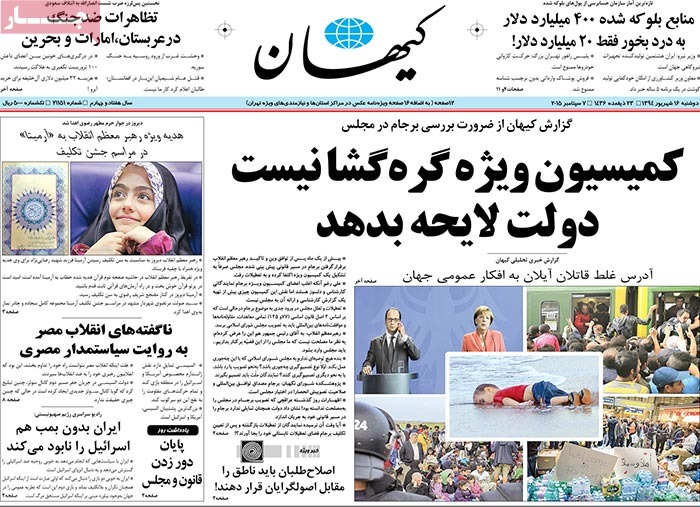 Mardomsalari: Gharavian, a Qom Seminary teacher, has urged the elite to raise public awareness so that the line of thinking Ahmadinejad and his followers promoted does not secure votes [to rise to power again].

Mardomsalari: The energy minister has said that construction of some unfinished dams will be halted. 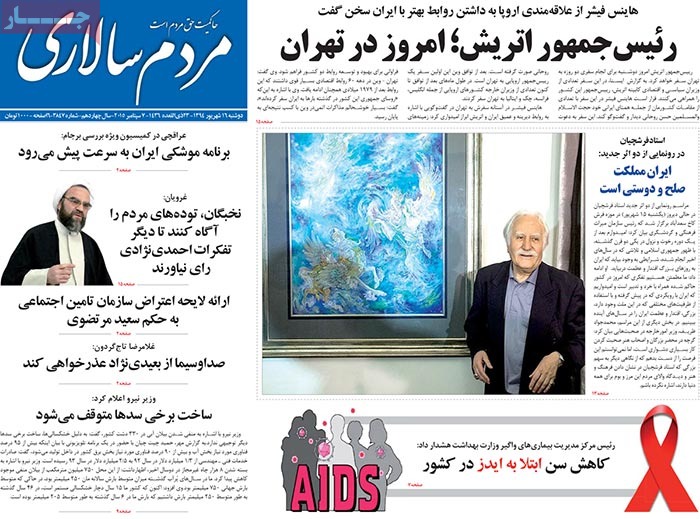 Payam-e Zaman: “The region should rid itself of foreign interference and terrorism,” President Rouhani said at a meeting with the Iraqi ambassador. 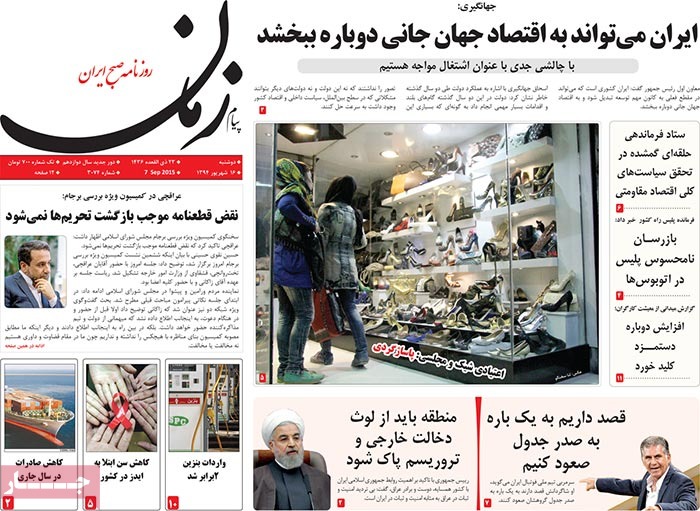 Resalat: “US policies are partly to blame for violence in the region,” said the Iranian foreign minister at a joint press conference with his Czech counterpart.

Resalat: The daughter of a martyred nuclear scientist has received an award from the Supreme Leader at her coming of age ceremony. 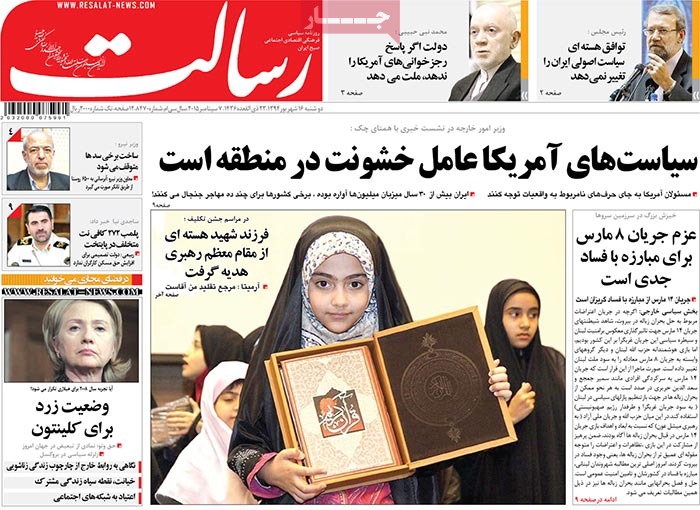 Saheb Ghalam: “Iran has and will spare no effort in helping the Iraqi people and government,” said the president at a meeting with the Iraqi ambassador.

Saheb Ghalam: [The oil minister has spoken of] Conclusion of deals with the Germans immediately after the termination of sanctions. 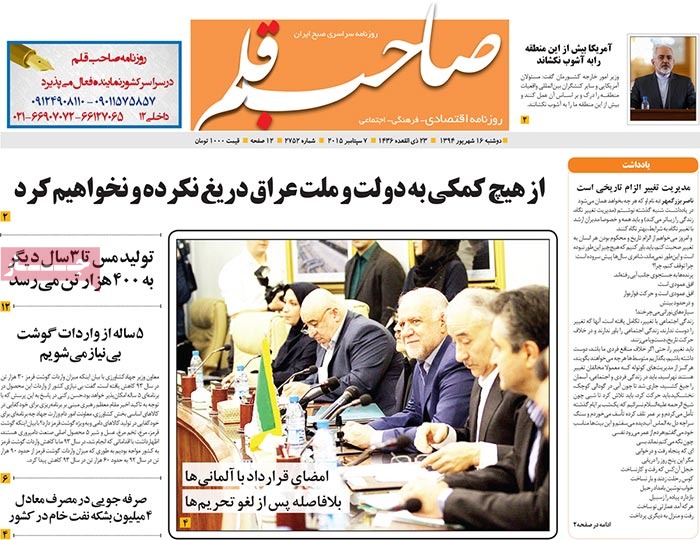 Sobh-e Eghtesad: “Iran has $120 billion worth of unfinished projects ready for investment,” said the chairman of Iran’s Chamber of Commerce. 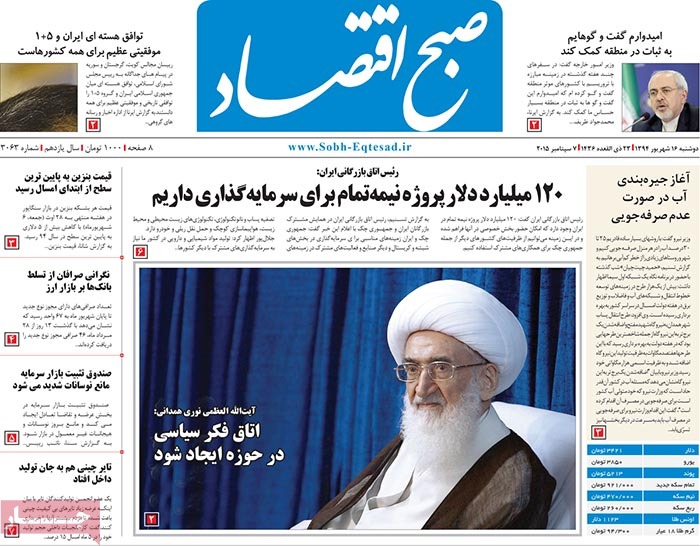