A look at Iranian newspaper front pages on September 6

IFP has taken a look at the front pages of newspapers on Sunday and picked headlines from 18 of them. IFP has simply translated the headlines and does not vouch for their accuracy.

The meetings in Tehran between the visiting Kyrgyz president and senior state officials, including the Supreme Leader, and President Rouhani’s comments at a news conference with his Kyrgyz counterpart dominated the front pages of Iranian newspapers on Sunday. Appointment by Ayatollah Khamenei of new members of the Supreme Cyberspace Council and its mission laid out in a decree by the Leader also appeared on the cover of dailies.

Ettela’at: “The only way to dispel the evil of hegemonic powers goes through resistance,” the Supreme Leader said at a meeting with the visiting Kyrgyz president.

Ayatollah Khamenei further said that establishment of firm ties among all Islamic countries lies at the center of Iran’s foreign policy.

Highlights of Ettela’at newspaper on September 6 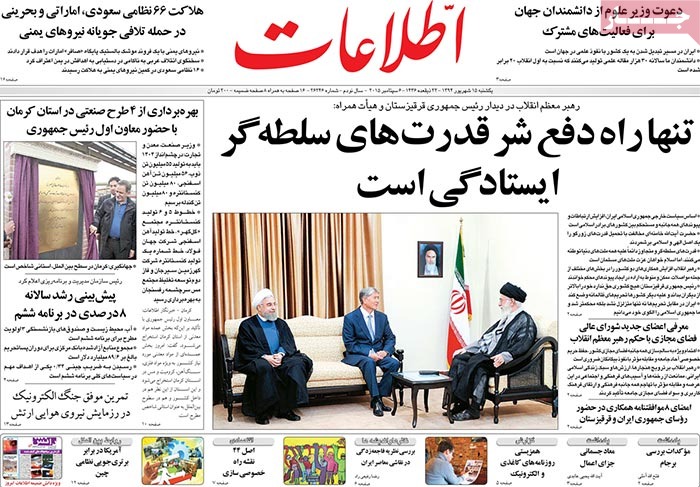 Abrar: Parliament Speaker Ali Larijani has said that the Islamic Consultative Assembly will announce its final decision on the Joint Comprehensive Plan of Action in the 30 days to October 22.

Abrar: Riyadh has thrown its weight behind the Iran nuclear talks after a meeting between King Salman and President Obama in the US. 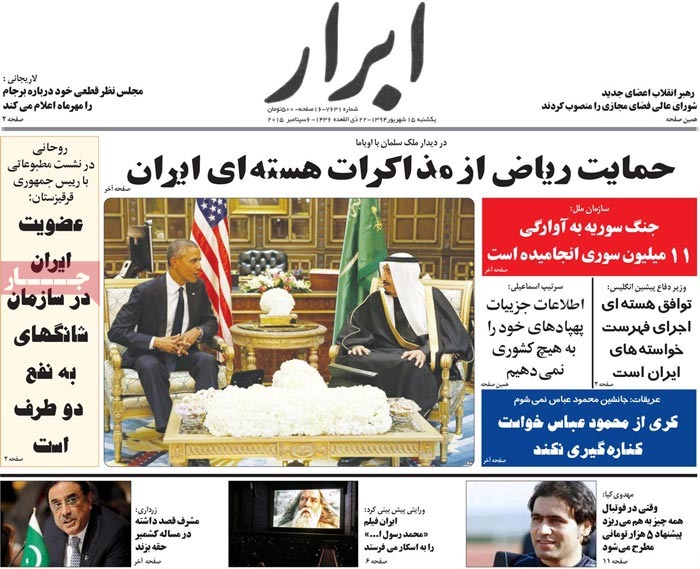 Abrar-e Eghtesadi: The plan to cut interest rates has been shelved. 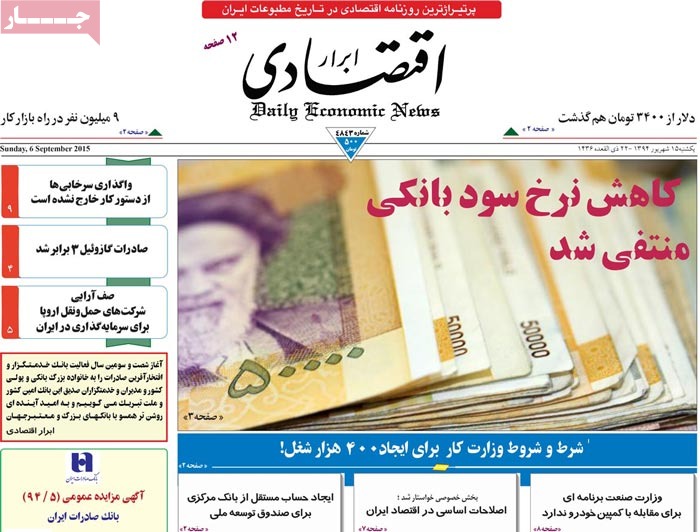 Afarinesh: A number of economists in a letter to the first vice-president have urged the Rouhani administration to allow the private sector to sell the country’s oil. 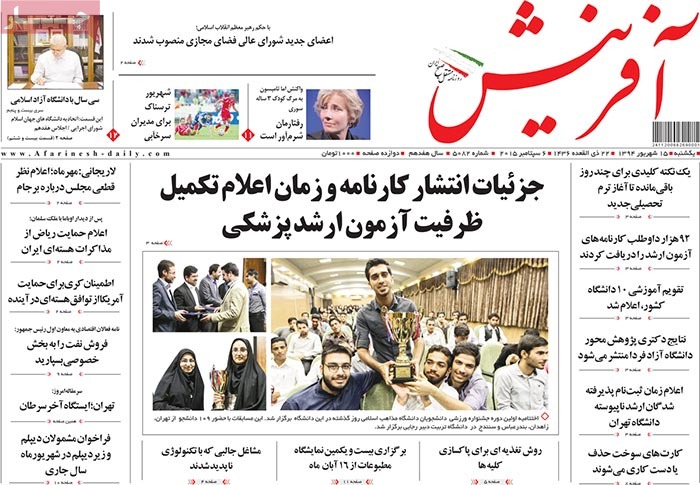 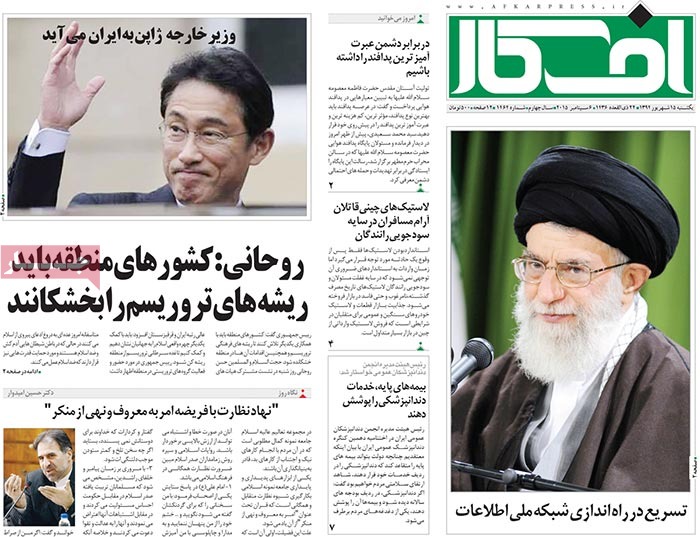 Aftab-e Yazd: “What the government has done on the foreign policy front has been quite a feat,” said the first vice-president.

Aftab-e Yazd: The ethical lesson Baidinejad taught to the Worriers [hardline opponents of President Rouhani and his policy of moderation]

Ranjbaran [the producer of a live TV talk show] apologized to the nuclear negotiator. [It came after a principlist MP conditioned his appearance at the talk show on the absence of Baidinejad]. 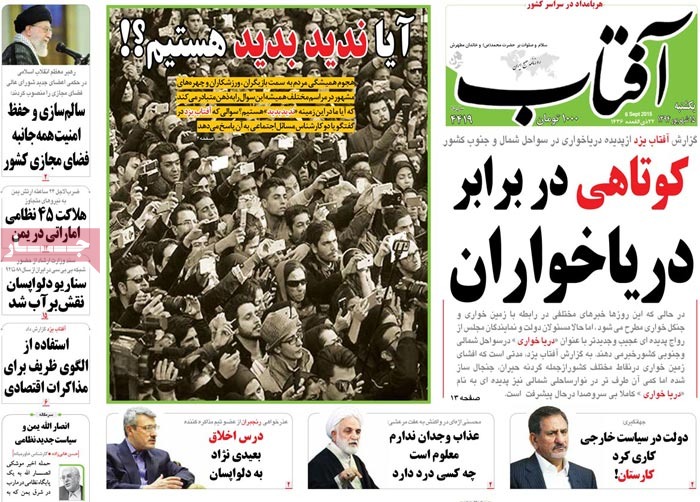 It comes as the prices of Peugeot’s 206 and Kia’s Pride keep slipping.

Arman-e Emrooz: The judiciary chief has ordered the formation of a commission to look into possible electoral offenses. 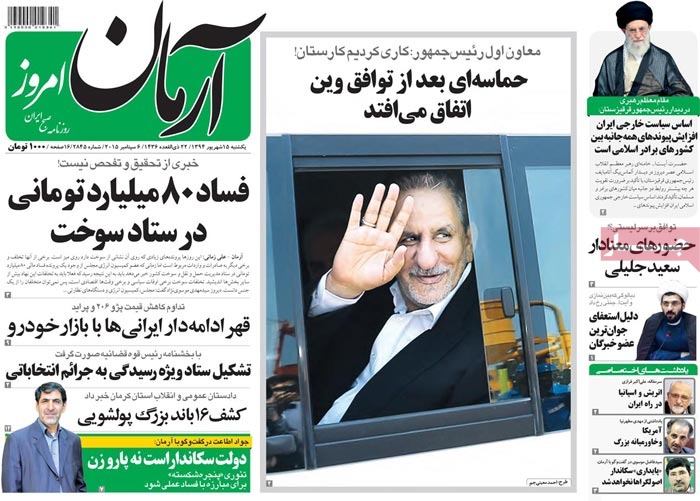 Asr-e Iranian: Eighteen worn-out oil derricks were hired to save a Jewish firm from the brink!

The revelation was made by a member of parliament’s Industry Committee about missing rigs at the Oil Ministry. 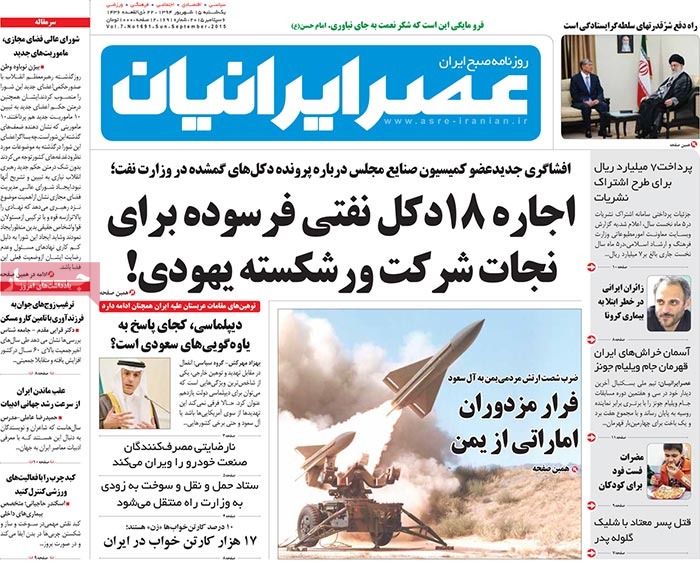 Asr-e Rasaneh: “Next year will be among Iran’s best in terms of the economic boom,” said the first vice-president. 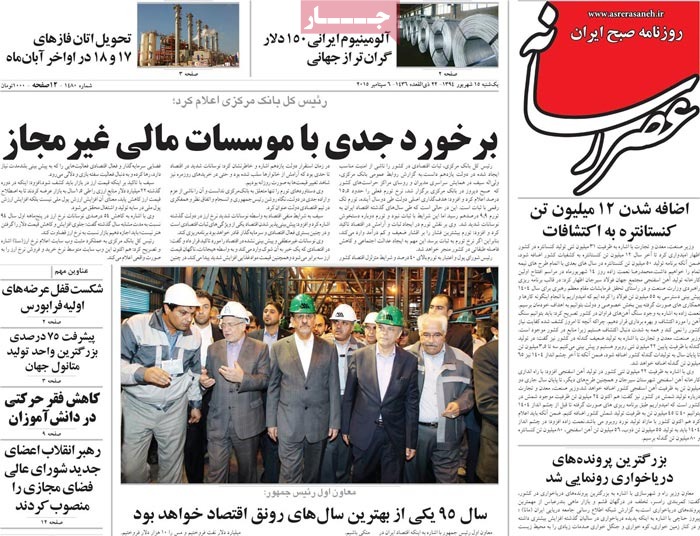 Asrar: What caused the young member of the Assembly of Experts to resign?

Asrar: “The drying of Hour-al-Azim Lagoon is a legacy of the previous government,” said Masoumeh Ebtekar, the director of the Environment Protection Organization. 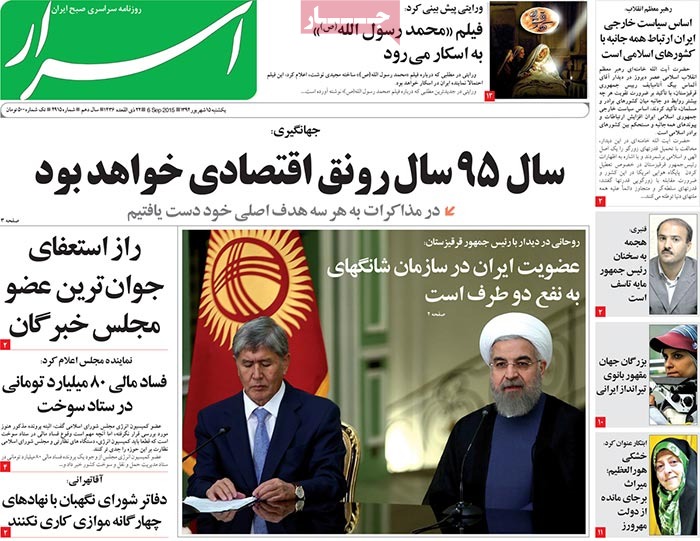 Ebtekar: The Syrian child drowned to save other refugees.

The announcement came at a meeting between Iranian president and his Kyrgyz counterpart in Tehran. 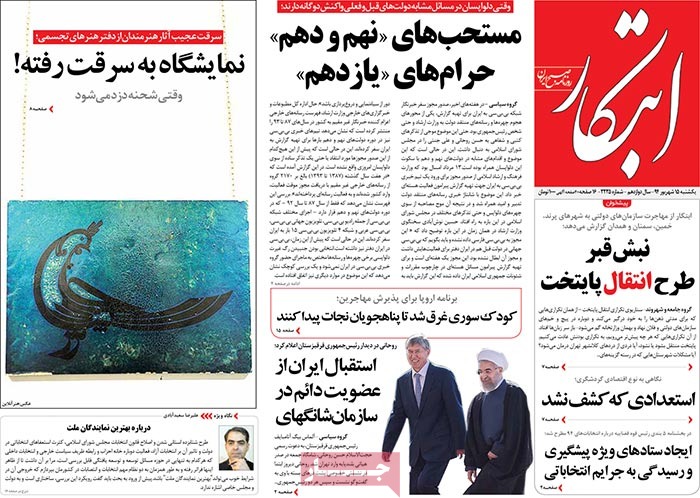 Etemad: The deputy judiciary chief has sent the letter Effat Marashi [Ayatollah Hashemi Rafsanjani’s wife] has released [on the imprisonment of his son] to Tehran Prosecutor Dowlatabadi, urging him to take action if he finds anything insulting in the letter. 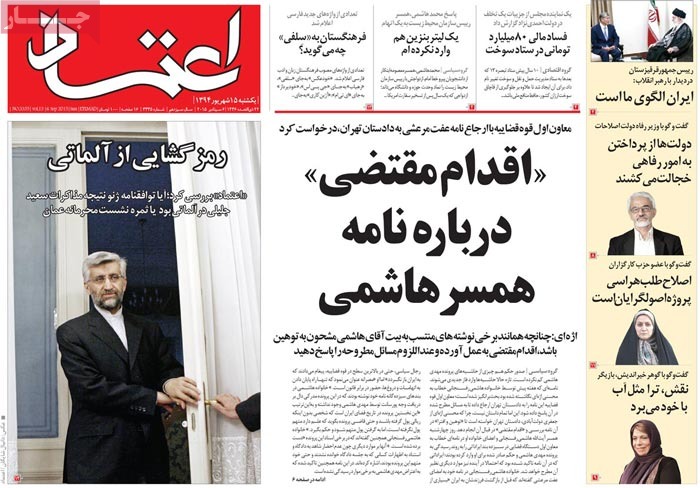 Hamkari Melli: “Unauthorized financial institutes will be seriously dealt with,” said the governor of the Central Bank of Iran.

Hamkari Melli: Variety has predicted that Iran will send Muhammad, Messenger of God to the Oscars. 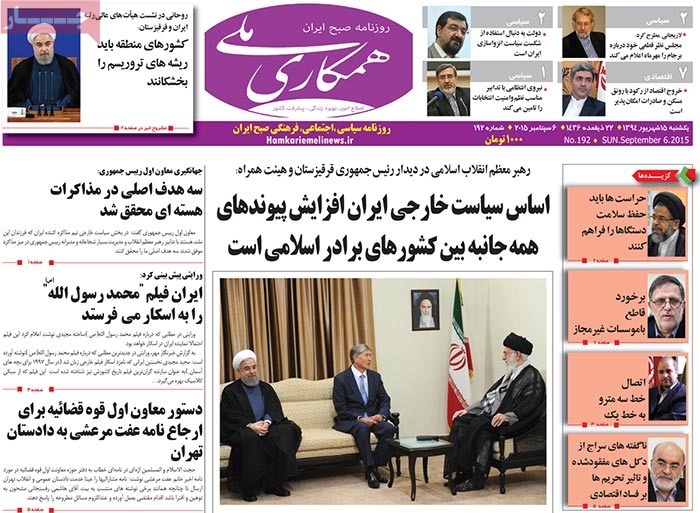 Iran: The Islamic Era Museum has reopened after nine years. 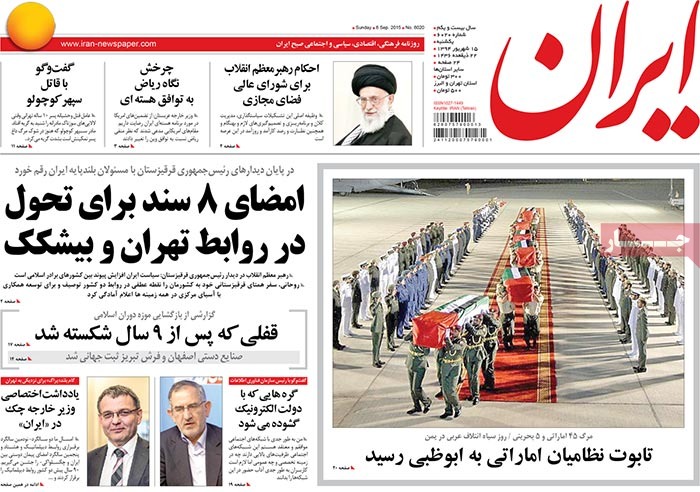 Javan: The Supreme Leader has urged members of the Supreme Cyberspace Council to promote Iran’s cyber power on an international scale. 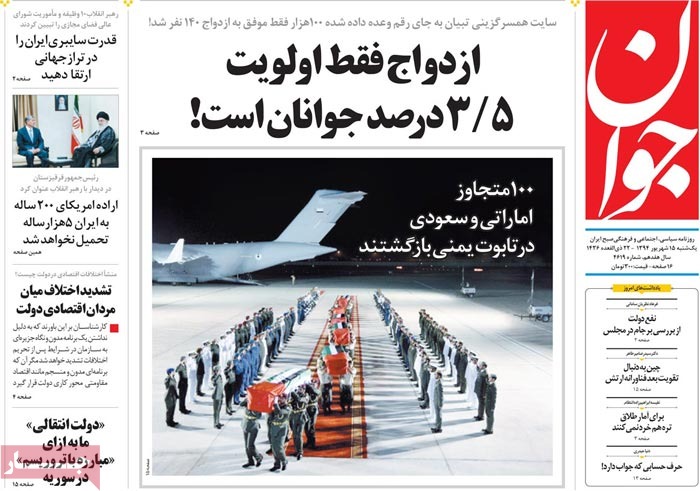 Jomhouri Islami: Emirati sheikhs are at odds over continued military operations against Yemen.

Jomhouri Islami: The number of people who have signed a petition for Netanyahu to be arrested while visiting London has gone beyond 100,000.

Jomhouri Islami: The United Nations has announced that the Syrian war has displaced 11 million people. 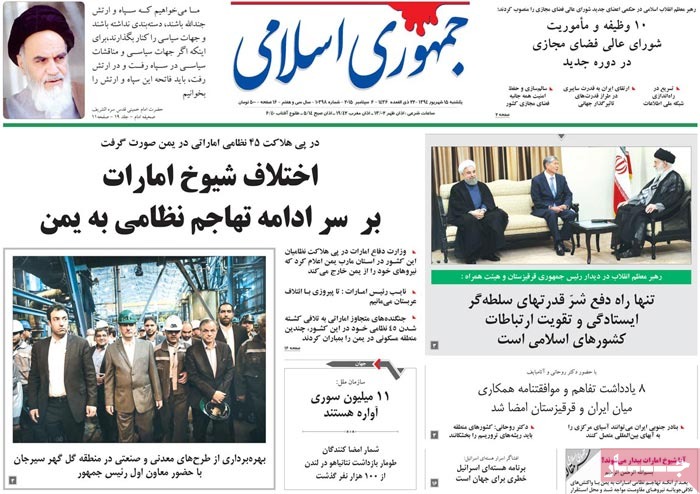 Kayhan: Ayatollah Khamenei made the final comment by underlining the need for the termination of sanctions.

That is how the world media covered the recent remarks of the Supreme Leader. 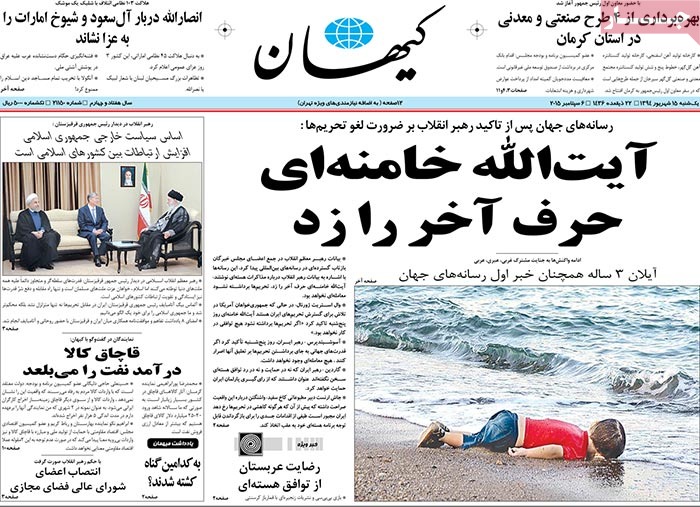 Khorasan: The industry minister has denied reports that he has received a warning from the president [over his comments on a popular campaign to boycott brand new locally-made cars]. 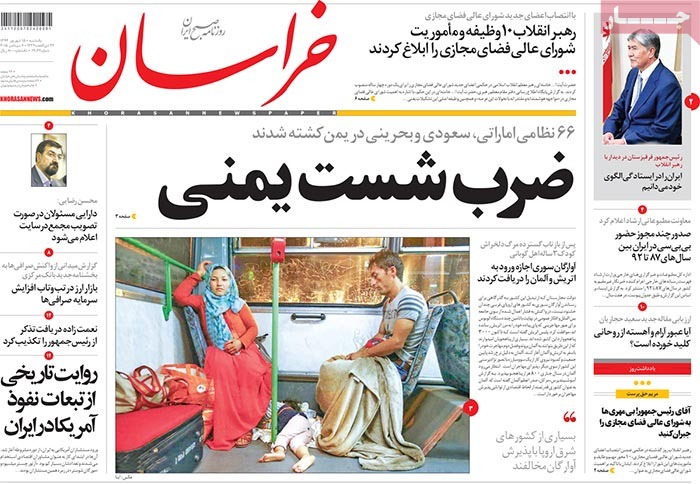