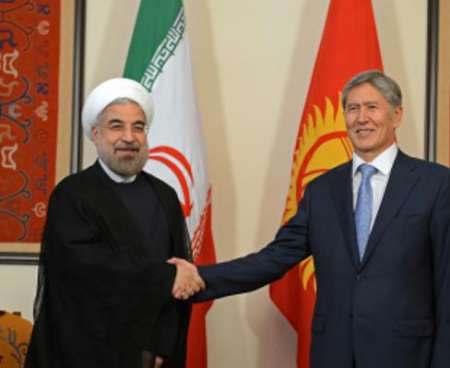 Kyrgyz President says nuclear victory due to Iran’s political will

Tehran, Sept 5, IRNA – Kyrgyzstan’s President Almazbek Atambayev congratulated the Iranian nation on nuclear victory, saying this was achieved only thanks to the nation’s political will.

In a joint press conference with President Hassan Rouhani here on Saturday, he said the two sides shared the view that bilateral cooperation has to be enhanced.
He said relations between the two countries should be raised to a fresh height in terms of quality.
Terming his talks with President Rouhani today as very good, he said he discussed construction of a railway network which could join the four countries of Iran, Kyrgyzstan, Tajikistan, Afghanistan and Iran together.
President Atambayev also called on the Iranian companies to contribute in construction of hydroelectric power plants in gyrkyzstan and said he signed a number of documents with Iran today as a token of a decade-long cooperation to commence in future.
He said he has invited President Rouhani to pay a visit to his country on an official visit which was welcomed by him.
The Kyrgyz President arrived in Tehran on Friday evening at the official invitation of President Rouhani at the top of a high ranking political-economic delegation aimed at evermore expansion of relations with Iran.
During his three-day stay here, President Atambayev is scheduled to meet with a number of Iranian officials to explore ways to expand bilateral political, economic and cultural cooperation.
He is also to sign a number of memoranda of understanding (MOUs).
Among the major issues to be discussed between the two presidents is the construction of an infra-structure railway which will connect Iran, Afghanistan, Tajikistan and Kyrgyzstan to China.
As his first foreign visit as Iran’s President, Rouhani visited Bishkek in 2013, capital of Kyrgyzstan, to participate in Shanghai Cooperation Conference.
According to the latest statistics, the Iran-Kyrgyzstan trade balance stands at about 50 million dollars, which is scheduled to rise to 2.5 billion in near future.