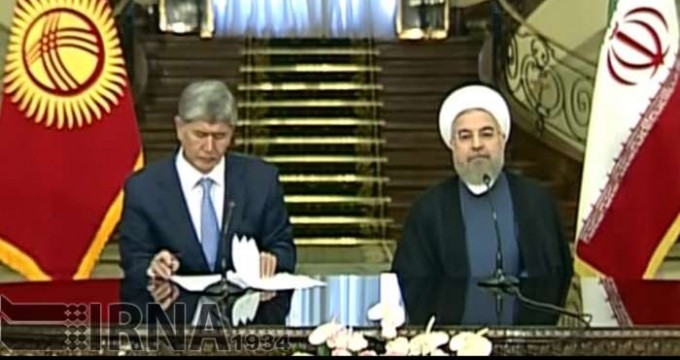 Iran’s President Hassan Rouhani has stressed the importance of strengthening cooperation with Kyrgyzstan to fight terrorist and extremist groups in the region.

Addressing a joint press conference with his Kyrgyz counterpart Almazbek Atambayev in the Iranian capital of Tehran on Saturday, Rouhani said the two countries should expand their intelligence, political and security cooperation in the campaign against terrorism and extremism.

“Considering the independence-seeking approach adopted the new Kyrgyz government and the closure of Manas air base to the Americans, we (Iran and Kyrgyzstan) have very close views about regional and international issues and can boost our cooperation,” the Iranian president pointed out.

The Manas Transit Center near the Kyrgyz capital of Bishkek had been used since the US-led invasion of Afghanistan in 2001.

In June 2013, the Kyrgyz parliament gave Washington until July 2014 to close its base.

The logistics hub, employing some 1,200 servicemen, was engaged in aerial refueling, personnel and cargo airlift, as well as humanitarian programs with Kyrgyzstan.

Rouhani further said Tehran and Bishkek have “very good” cooperation which should be further improved given the fact that terrorist groups such as al-Qaeda, Taliban and Daesh are carrying out “destructive” activities and committing crimes in the region.

He added that the Kyrgyz president has vowed to make efforts to turn Iran’s observer status at the SCO into a permanent one.

“Given the security situation we are currently witnessing in the region, Iran’s [permanent] membership in the Shanghai Cooperation Organization can absolutely be beneficial to both sides,” the Iranian president pointed out.

Kyrgyzstan, China, Russia, Kazakhstan, Uzbekistan and Tajikistan are the six permanent members of the SCO. Iran, India, Pakistan, Afghanistan, Belarus and Mongolia have observer status at the organization.

The Iranian president further called for the expansion of economic relations with Kyrgyzstan, particularly after the conclusion of the nuclear agreement between Iran and six world powers, dubbed the Joint Comprehensive Plan of Action (JCPOA), in mid-July.

“Under the current regional circumstances and particularly after the JCPOA, we are facing conditions under which we can have broad cooperation with countries, especially in the region, in economic fields,” Rouhani said.

On July 14, Iran and the P5+1 countries – the United States, Britain, France, China and Russia plus Germany – finalized the text of the JCPOA in the Austrian capital of Vienna.

The Iranian president also expressed the country’s readiness to construct hydro-electric power plants in Kyrgyzstan to help the country meet its electricity needs.

He said Kyrgyzstan needs to be linked to high seas to improve its trade and economy.

He noted that southern Iranian ports such as Chabahar and Bandar Abbas can connect Central Asian countries, including Kyrgyzstan, to international waters.

He said Tehran and Bishkek agreed to draw up a 10-year plan which would see the two sides tap into their potential to bolster cooperation in order to serve mutual interests.

Iran and Kyrgyzstan signed eight memoranda of understanding and documents for cooperation in the presence of Rouhani and Atambayev prior to their press conference.

The Kyrgyz president arrived in Tehran on Friday for an official three-day visit at the head of a high-ranking politico-economic delegation. Atambayev’s visit is taking place upon the official invitation of his Iranian counterpart.