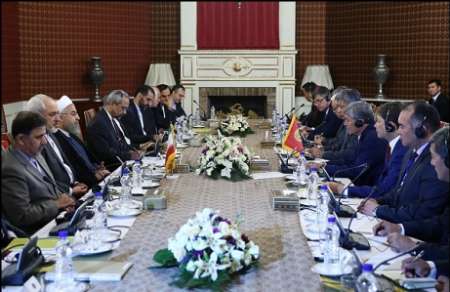 TEHRAN (Tasnim) – In a Saturday ceremony attended by Iranian President Hassan Rouhani and his Kyrgyz counterpart Almazbek Atambayev, Iran and Kyrgyzstan signed a number of Memoranda of Understanding (MoU) to promote mutual cooperation.

The two countries’ high-ranking officials signed eight MoUs and cooperation agreements during the ceremony held in the Iranian capital of Tehran with the two presidents in attendance.

An MoU on agricultural cooperation, an agreement on the extradition of criminals, and a plan for increased cooperation between the two states’ foreign ministries were among the agreements.

The ceremony was held after a meeting between Rouhani and Atambayev, during which the two sides explored avenues for the enhancement of bilateral relations in diverse fields.

The two officials emphasized the necessity for stronger cooperation between Tehran and Bishkek, and called for efforts to unleash the two countries’ political, economic and cultural potentials to boost relations.

Atambayev arrived in Iran late Friday at the invitation of President Rouhani. A high-ranking delegation of Kyrgyz officials are accompanying Atambayev on the visit.