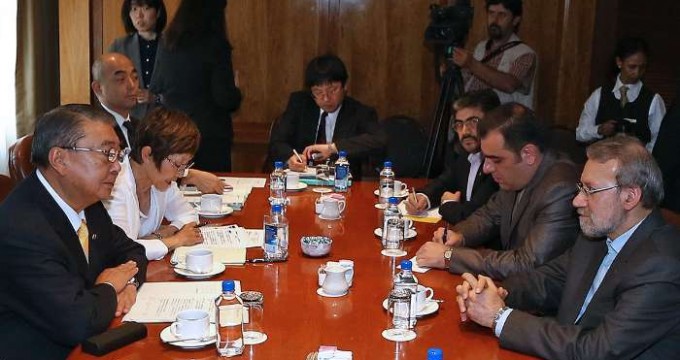 A top Japanese parliamentarian has welcomed the nuclear agreement recently sealed between Iran and the P5+1 over the Islamic Republic’s nuclear program.

Tokyo is delighted at the agreement and would like to see the ground prepared for its implementation, said Speaker of Japan’s House of Representatives Tadamori Oshima in a meeting with Iranian Parliament Speaker Ali Larijani in New York, the United States.

On July 14, Iran and the P5+1 countries – the United States, Britain, France, China and Russia plus Germany – finalized the text of a nuclear agreement dubbed the Joint Comprehensive Plan of Action (JCPOA) in the Austrian capital, Vienna.

Oshima and Larijani are currently in New York to attend the Fourth World Conference of Parliament Speakers convened by the Inter-Parliamentary Union (IPU) in cooperation with the United Nations at the UN headquarters.

The top Japanese parliamentarian further said his country stands ready to work with Tehran to help promote peace and stability at regional and international levels.

Japan is prepared to open up a new chapter in its relations with Iran on political, parliamentary, economic, trade and cultural fronts, Oshima further said.

Representatives from Iran and the P5+1 group of world powers attend a last plenary session at the United Nations building in Vienna, Austria, July 14, 2015. (Photo by AFP)

Larijani, for his part, said the Iranian government and people have a “positive view” toward the enhancement of Tehran-Tokyo ties.

Age-old relations between the two countries in political, economic and cultural arenas serve as “capital” for closer mutual cooperation and interactions, he said.

“All potential should be tapped in order to boost [bilateral] relations,” said the Iranian parliament speaker.

In the post-sanctions era, said Larijani, the ground is more prepared for closer Tehran-Tokyo cooperation and Japan can seize this opportunity.

Larijani also expressed hope that an extradition treaty inked by Iran and Japan will come into force as soon as possible.