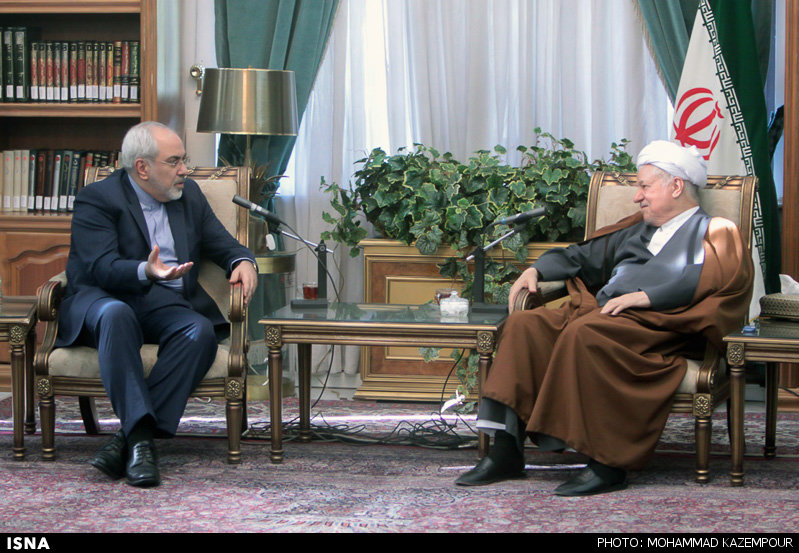 ‘Efforts by Mohammad-Javad Zarif, the head of Iran diplomatic organ, will be everlasting,’ said Rafsanjani in a meeting with Zarif.

Rafsanjani advised the Iranian nuclear team not to be disappointed due to harsh stanches of certain minority groups.

He said the Iranian team’s success in talks with the world six major powers and its success in proving Iran’s righteousness despite opposition of Western countries for 13 years, was not so easy.

He referred to the welcome accorded by the Iranian public opinion to the outcome of the talks and told Zarif, ‘Let’s not lose hope only because of harsh stances of a limited minority individuals. Détente, defusing and countering dirty Iranphobia policy, constructive interaction with the world, while maintaining dignity, wisdom and authority, were among outstanding features of the 11th government.’

‘For the same reason, your job will be kept and remembered in the Iranian history for ever and I assure you that all will judge about this juncture, while taking all conditions into consideration,’ he added.

Pointing to proponents and opponents of nuclear talks in the US administration and Senate, Rafsanjani said the important point is both opponents and proponents in their speech emphasize Iran’s capability and this is an achievement made only through [people’s patience, the reasoning power of the nuclear team and righteousness of the Islamic Revolution.

He also emphasized having a close watch on the nuclear talks until gaining final result and complete removal of unjust sanctions against Iran and noted that the diplomatic organ is expected to powerfully help solve regional crises and problems, while caring for convergence, stronger cooperation and alliance of countries against the ugly menace of terrorism.