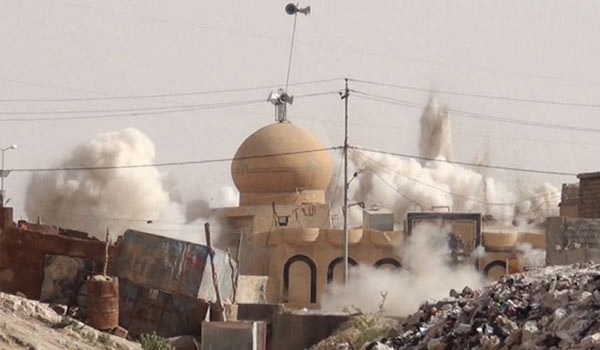 TEHRAN (FNA)- Local sources in the Northern Iraqi Nineveh province said that the ISIL Takfiri terrorists bombed a mosque in the southern regions of the province, and also removed historical inscriptions from the front of two churches in Central Mosul.

“The ISIL terrorists planted a booby-trapped bomb inside the Abu Bakr mosque in Shura district and blew it up under the pretext of the existence of a tomb inside the mosque,” the sources said.

“The ISIL militants also removed historical and heritage inscriptions from the front of Virgin Mary church and the Chaldean church in the Doctors Street in Central Mosul,” the sources added.

In March, the ISIL Takfiri militants bombed a minaret in Shingal, the town’s most historical monument, a Pishmarga commander said.

The Shingal minaret, an ancient site, was seen as a religious symbol for Ezadi Kurds.