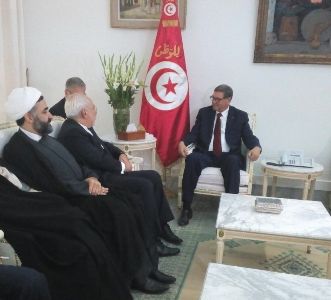 Zarif, who is on a visit to Tunisia, made the remarks in a meeting with Tunisian Prime Minister Habib Essid.

‘Preventing the spread of extremism and terrorism has to become a primary goal for cooperation among Muslim countries,’ Zarif said.

Referring to the nuclear deal reached between Iran and the six world powers on July 24, Zarif said that this deal was a major achievement for all the regional and Muslim countries.

He said that negotiations over Iran nuclear program proved that dialogue, not pressure, provides a basis for negotiations.

The foreign minister underlined that establishment of air and shipping lines prepares the ground for enhancement of tourism cooperation between Iran and Tunisia.

Meanwhile, the Tunisian prime minister welcomed Zarif’s visit to North Africa and voiced his country’s readiness for promotion of bilateral cooperation with Iran.

Essid said that industry and agriculture are two areas for cooperation between the two countries, adding that Tehran and Tunis can share experiences in these areas.