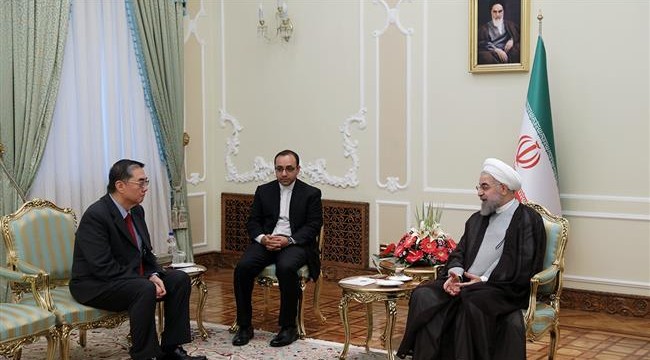 “The Islamic Republic of Iran will have more appropriate conditions after the nuclear agreement and the lifting of illegal sanctions to establish and improve trade and economic relations with other countries,” Rouhani said in a meeting with Singapore’s new non-resident Ambassador to Tehran Ong Keng Yong on Sunday.

On July 14, Iran and the five permanent members of the UN Security Council – the United States, Britain, France, China, Russia – and Germany finalized the text of the nuclear agreement, dubbed the Joint Comprehensive Plan of Action (JCPOA), in the Austrian capital of Vienna.

Rouhani said Iran and Singapore have always maintained good ties but should increase their trade and economic cooperation to an “acceptable” level.

The Iranian president said the two countries should improve cooperation in banking and tourism. He also expressed Iran’s readiness to bolster ties with Singapore in the fields of energy, science, technology and culture.

The Singaporean ambassador, who submitted his credentials to President Rouhani, called for increased trade and economic exchanges with Iran. He said Singapore is keen to boost cultural and tourist ties with the Islamic Republic as a country with an ancient civilization.

Rouhani called for cooperation between Iran and Ireland to achieve common goals such as ending terrorism and violence in the region and across the world.

Ward submitted his credentials to the Iranian president and said the Islamic Republic plays a key role in the Middle East.

The Irish ambassador added that his country is ready to cooperate with all countries in the fight against terrorism.

Rouhani hoped that the two countries would expand their ties in different fields.

The Mongolian envoy called for the participation of Iranian firms in his country’s infrastructural projects in such fields as oil, electricity, road construction and agriculture.