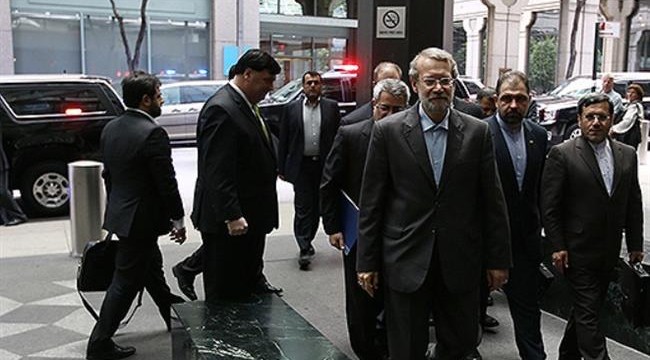 He is scheduled to participate in the Fourth World Conference of Parliament Speakers convened by the Inter-Parliamentary Union (IPU) in cooperation with the United Nations at the UN headquarters.

The Iranian official is expected to hold talks with his counterparts attending the conference on various issues including mutual interaction, economic development and joint ventures as well as key regional and international matters.

The Fourth World Conference of Parliament Speakers will be held in New York from August 31 through September 2.

During his stopover in Frankfurt, Germany, the Iranian parliament speaker had a telephone conversation with German Foreign Minister Frank-Walter Steinmeier, where Larijani said Germany played a positive role in nuclear negotiations between Iran and the P5+1 group of countries – the US, the UK, France, Germany, Russia and China.

He expressed hope that exchange of visits between Iranian and German officials would improve economic relations.

The German foreign minister, for his part, said the ground is prepared for the expansion of ties with Iran in all fields given Tehran’s great capacity for enhanced economic cooperation.