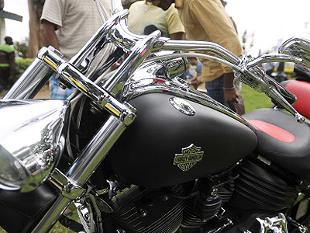 Aug 30 The joy of riding big Japanese and American motorbikes was just one of the pleasures taken away from Iranians after the country’s Islamic revolution.

But three decades on, to the delight of enthusiasts, there are signs of restrictions being eased. This month a dozen bikers on pre-revolutionary and newer models were allowed a strictly regulated ride in Tehran.

It was still a far cry from the open highways of “Easy Rider”.

Special permission is needed to ride just one weekend per month and the cruise is limited to specific streets during daylight hours. Women are still prohibited from ridng bikes.

It fits in, however, with other developments as Iran opens up to the West again under reform-minded President Hassan Rouhani.

The ban outlawing motorcycles with engines above the size of 250 cubic cm was introduced in the early years of the revolution to halt drive-by killings of Iranian officials by the opposition.

It was also part of an effort to eradicate vestiges of an un-Islamic Western lifestyle that had prevailed under the monarchy overthrown in 1979. Women were barred from riding motorcycles as it was seen as incompatible with Shi’ite Islamic values.

Motorbikes with big engine power were used exclusively by the Basij, the government’s plain-clothes security force, which often paraded on them around Tehran in a show of power.

Under the reprieve, authorities select members of the Tehran Motorcycling and Car Racing Association to licence for street riding after running them through security checks, the association’s manager Mehrdad Hemmatian said.

Police and Interior Ministry agents monitor the riders while they are on the road.

The government-linked association is also lobbying to bring down import tariffs on sports bikes to 6 percent from 100 percent.

People involved with the government are mostly behind the demand for motorcycles as it is easier for them to obtain special permission and they are better able to afford the expensive American-made Harley Davidson motorcycles.

Bikers who are not from the elite can manage to afford cheaper Japanese sports bikes for use on race tracks.

Under reforms initiated by Rouhani, who successfully concluded an accord with world powers on curtailing Iran’s nuclear programme in July, life could become a bit easier for some Iranians as trade sanctions are lifted.

Marginal advancements in allowing Western culture to seep into Tehran are mirrored in other ways, for example a knock-off version of fast food chain McDonald’s called Mash Donald’s in a posh neighbourhood of the capital.

Many Iranians now also have luxury Japanese and European cars as some of the policies instituted after the downfall of the Shah are relaxed.

American dealerships for Harley or General Motors have been absent from Iran but a sanctions deal would open the gateway for such manufacturers to have a local presence.

Businesses worldwide want to get into Iran, home to some 80 million people and with a sizable middle-class craving international brands.

In a sign of its reconnection to the international world, Britain and Iran reopened their embassies in their respective capitals last week.

While the motoring association is trying to have the ban fully lifted, Iranian bikers have found other ways to satisfy their passion.

Symbolising the love for U.S.-made Harley Davidson motorcycles, local bike manufacturer Tondar Shahab makes replicas with street-legal engine of 250 CC as opposed to the usual range of 883 and 1800 CC.

Some ship in Harley parts from Dubai before assembling them in Iran – sometimes just to display the bike in a prominent place in their homes.

Dubai is a main source for international brands that are barred from having official stores in Iran, such as Apple electronics.

Often these are loaded onto small ships or dhows, which sail across the narrow Arabian Gulf to the Iranian port of Bandar Abbas and eventually make their way to Tehran.

Dubai is also where some Iranians spend their holidays and indulge in their love of riding U.S- made motorcycles. There are scores of Iranian Harley owners in the city.

Shabab, an Iranian enthusiast who lives in Dubai, often rides with his friend Shahbol on their Harley Ultras from the city to the desert resort of Bab Al Shams, a popular sheesha and drinks stop for riders.

“At the end of the day, when you have a passion you will find a way to ride whether it is in Dubai, in Europe or the United States,” Shabab said. “And someday also in Iran.”