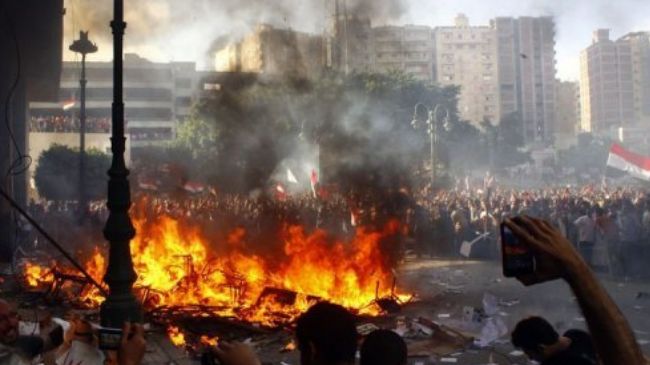 Alwaght- After removal of Mohammad Morsi, an Islamist president and top leader in Egypt’ Muslim Brotherhood, in 2013 and despite the succession of Abdel Fattah el-Sisi, who has stepped up an “ iron fist policy” against anti-military government opponents , Egypt has been obviously in chaotic conditions domestically and internationally.

Suffering from a tense nationwide debate and quarrel to drive out Muslim Brotherhood from Egyptian political arena, the county’s economy and political status have received remarkably big blow, and in the same time the poor Egyptian community establishments have came on the verge of collapse as a result of widespread insecurity and the military institution’s power monopolization.

Other elements that pose immediate threat to the Egyptian community’s unity and social order are: firstly, the rise of extremism and infiltration of Takfiris and Salafis into Sinai Peninsula and secondly, the ISIS terrorist group’s attempts to recruit Muslim Brotherhood’s younger proponents who are opposing the current government and are fed up with el-Sisi’s crackdowns. Recently, Ansar Bait al-Maqdis, an ISIS’s affiliate, has set its focus on Egypt’s northern Sinai and Suez region’s southern Al Sharqia province, as it increased its attacks domain against Egyptian military after swearing allegiance to ISIS.

There were also unconfirmed reports claiming that there was a link between Ansar Bait al-Maqdis group and some of Muslim Brotherhood’s leaders during Morsi’s presidency. Immediately after the Morsi’s Islamist government ouster, the Egyptian Supreme Court accused Muslim Brotherhood of having financial and ideological links to Ansar Bait al-Maqdis terrorist group and Hamas Palestinian group in Gaza. The court’s claim has provided the government with pretext for crackdowns and use of violence against street protestors demonstrating the unprecedented and heavy-hand court rulings against Muslim Brotherhood’s top leaders.

The Egyptian political outlook could even deteriorate after ISIS leaders have demanded the Muslim Brotherhood group to join the terrorist group and break away from the legal and conventional methods of protestation, including civil disobedience and street demonstrations.

Anyway, Muslim Brotherhood for the time being is experiencing highly tense conditions in more than eighty years of its political life.

The group has limited options to keep standing and successfully manage out of the Egypt’s adverse conditions. The first choice available for the Muslim Brotherhood group is to gradually integrate into the emerging hazardous ISIS terrorist group under the government’s iron fist policy against it. Followed by the radical and revolutionary pro-Muslim Brotherhood youth groups, an option could appear due to divide in the group and pressure on the Muslim Brotherhood leaders, which can trigger retaliatory actions and violent responses against the crackdowns of the security and military forces, as the street protests and police and military force’s interventions could led to considerably violent and bloody confrontations.

A second option, conventionally followed by the Muslim Brotherhood older leaders, is rejecting violence and exercising restraint and patience. The group’s older generation has lastingly believed that peaceful and moderate ways of protesting make the base for Muslim Brotherhood strategy. Exposed by tough treatments by different governments during its existence, the group has managed to win the Egyptian community’s confidence and have an effect on it by insisting on religious and logical approaches.

Muslim Brotherhood is believed to be able to move out of present difficult conditions and regain place and power by avoiding violence, and taking trust-building steps. Based on the groups past experiences, a divide in the structure of Muslim Brotherhood brings it a greater loss than does the confrontation of Egypt’s Scholar and leftist groups. In the meantime, some of expatiated figures of Muslim Brotherhood admit that there is a gap in the group’s body, arguing that in their organization’s manifesto there is no call and place for violent confrontations.

However, developments inside Muslim Brotherhood confirm that a process of radicalization is underway among its young proponents who are leaning towards ISIS terrorist group. After suffering great losses in Syria and Iraq, ISIS terrorist group has started attempts to creep into North African countries such as Libya and Egypt to fulfill its aim of establishing so-called Islamic State. The terrorist group exploits the troubled social and political conditions and sectarian and religious chasms to push for its goals. ISIS’s call for integration and recruitment under its mechanism and confronting the government in Egypt adds to country’s tense situation internally and externally. The reality is that ISIS terrorist group is in the process of transforming from a regional to a global theat.

The Egypt’s military institution has failed to make remarkable gains in fighting the Ansar Bait al-Mqdis group that paves the way for terrorist groups to infiltrate deeper into the country with the possibility that some radical Muslim Brotherhood’s group join them. Widespread poverty and desperation with the actualization of El-Sisi’s promised reforms could engage the country in disjunction and even civil war.

Moreover, Egypt’s domestic crisis and emergence of ISIS have led to a rise of fresh political forces. El-SISI’s struggle against Takfiri groups and ISIS puts Egypt beside such countries as Syria, Iraq and even Iran which make up the frontline of fighting the terrorist group. However, the majority of the states advocate Egypt’s 2013 coup are Persian Gulf Arab countries like Saudi Arabia that are main supporters of Takfiri though; therefore any proximity between Egypt and the countries in frontlines of fighting ISIS could result in Egypt’s separation from ISIS regional supporters. This leads to Egypt being deprived from financial support.

With Egyptian security forces intensifying their assaults against opponents and in the same time ISIS’s integration and recruitment call in Egypt, the continuation of crisis is plausible. Additionally, participation in regional coalition against ISIS could reinforce the coherence and coordination of the bloc of the countries fighting extremism.

Dealing with growing political and economic issues and regarding the government’s failure to create unanimity within the texture of Egyptian community, ISIS considers Egypt as a good pretext to cover up its losses in Syria and Iraq. The terrorist group is involved in a process to open up a new front in in North Africa and infiltrate into Egypt, a country from which ISIS would propagate its ideology in Tunisia, Libya and Algeria.

Present condition of Egypt indicates that the country is at risk of slipping into even more troubles as the opposing sides do not heed law to reach an appropriate resolution.