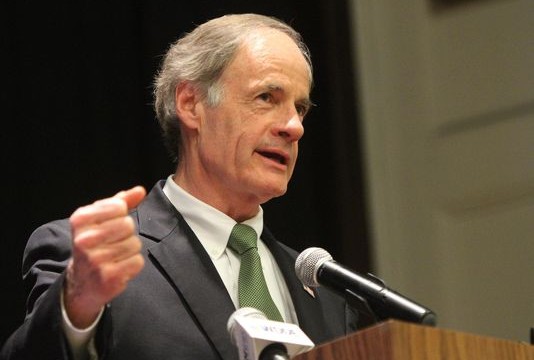 Carper, of Delaware, announced his position in an opinion article published in his home-state newspaper, The News Journal, reported on its website.

“America and our five negotiating partners … have reached an historic agreement with Iran to end their pursuit of nuclear weapons for years and, maybe, forever,” Carper, D-Del., wrote in the op-ed the newspaper reported. “The deal provides Iran an opportunity to rebuild its economy and shed the pariah status it’s borne for decades.”

The Republican-controlled Congress has until the end of the day Sept. 17 to pass a resolution disapproving the agreement between six world powers and the Islamic Republic. Obama has said he will veto a disapproval resolution if it gets to his desk. The president would need backing from 34 senators to keep that chamber from overriding his veto.

While the House has enough votes to pass a measure disapproving the accord, it’s unclear whether the Senate does. Assuming all 54 Senate Republicans oppose the accord, they would need support from six Democrats to get the 60 votes necessary to advance a resolution.

Thus far only two Democratic senators — Chuck Schumer of New York, the third-ranking Democrat in the chamber, and Bob Menendez of New Jersey — have said they oppose the deal.

As of Thursday, 14 Senate Democrats hadn’t announced how they’ll vote. Those who have yet to disclose a position include Maryland’s Ben Cardin, New Jersey’s Cory Booker and Delaware’s other senator, Chris Coons, who plans to announce his decision on the accord on Tuesday, Sept. 1.

The 435-seat House already has more than the 218 votes needed to pass a resolution of disapproval. As of Thursday, at least 230 Republicans and 14 Democrats were opposed to the deal. At least 73 House Democrats support the agreement, while the rest have yet to announce a position.