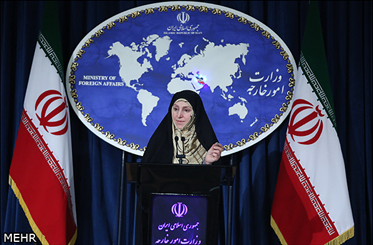 Iran again calls on US to release 19 detained Iranians

Iran’s Foreign Ministry spokeswoman has again raised the issue of 19 Iranians held in the U.S., calling for them to be released amid the trial of a detained Washington Post reporter.

Leader of the Islamic Revolution Ayatollah Seyyed Ali Khamenei says the enmity of the US and the Israeli regime toward Iran has never subsided.

Iran and China on Wednesday called for implementation of the Joint Comprehensive Plan of Action and expansion of cooperation in the field of peaceful nuclear energy.

Iran’s envoy to the International Atomic Energy Agency (IAEA) reminded the UN nuclear watchdog of its responsibility to keep secrecy of the data on its agreements with Tehran.

Foreign Minister Mohammad Javad Zarif underlined that the reason for failure of the sanctions was the elections and not the negotiations, and said that the elections stopped the embargos.

Iranian Foreign Ministry Spokeswoman Marziyeh Afkham rejected media reports on talks between Iranian and British officials about Iran’s attitude towards the Zionist regime of Israel during a recent visit to Tehran by Britain’s foreign secretary.

Sen. Patty Murray (D-Wash.) announced her support for the Iran nuclear deal on Tuesday, becoming the final member of the Senate’s main Democratic leadership team to weigh in on the agreement.