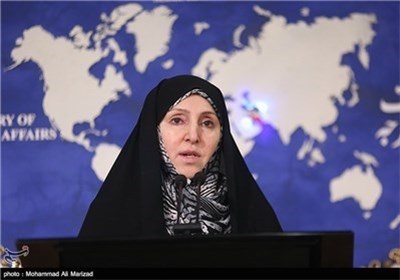 Speaking in a weekly press conference, she noted that Iran and Britain have opened a new chapter in bilateral relations.
Promotion of Iran-Britain relations could be discussed in the future if everything goes well, Afkham underlined.
British Foreign Secretary Philip Hammond reopened British embassy in Tehran on Sunday morning.
Hammond arrived in Tehran to reopen the UK embassy in the country and hold meetings with the Iranian officials.
During his two-day stay in the city, conferred with ranking Iranian officials including President Hassan Rouhani, Parliament Speaker Ali Larijani as well as his Iranian counterpart Mohammad Javad Zarif.
He also met with Secretary of the Supreme National Security Council Ali Shamkhani, Minister of Petroleum Bijan Namdar Zangeneh and Governor of the Central Bank of Iran Valiollah Seif.
This is the first visit by a British foreign secretary to Iran since 2003.
The UK has had no diplomatic presence in Tehran since a group of protesters stormed the British embassy in 2011 but the election of Hassan Rouhani as president brought about a significant improvement in relations.
Initially, the embassy will be headed by a charge d’affaires, Ajay Sharma, but Hammond had said an agreement on upgrading to full ambassador status is expected to be reached in the coming months.
Meanwhile, Deputy Foreign Minister Majid Takht Ravanchi said on Saturday that after reopening of UK embassy in Tehran, relations between the two capitals will be at chargé d’affaires level.
The diplomat told reporters here that London and Tehran have agreed to change the level of their relations from non-resident chargé d’affaires to resident chargé d’affaires.
The Change of chargé d’affaires is out of question at present time, he said.
Concurrent with Hammond’s visit to Tehran, Iranian embassy in London also reopened in a ceremony.
It is expected that after the two countries’ diplomats and embassy staff return to their works, the two embassies resume consular services and issuance of visa.