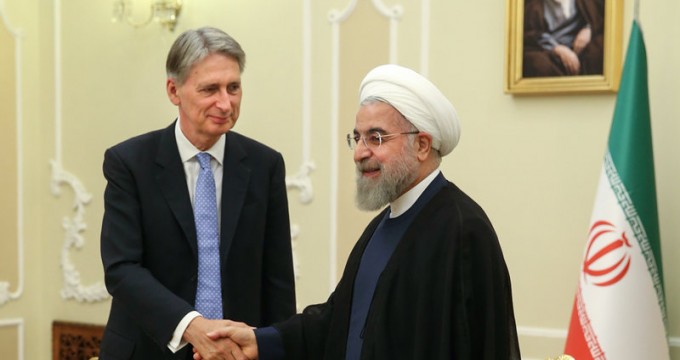 ‘Iran is too large a player to simply leave in isolation’

The British embassy in Iran has reopened, nearly four years after it was attacked by protestors.

Iranian President Hassan Rouhani says threats of military action and re-imposition of sanctions against Tehran will harm efforts for the restoration of trust between Iran and six world powers.

Shamkhani, Hammond call for boosting all out ties

Royal Dutch Shell will repay a $2 billion debt to the National Iranian Oil Company (NIOC) when sanctions on Iran are lifted and will consider investing in the country’s vast energy sector, Shell’s boss for new business said.

Britain says Iran sanctions could be lifted next spring

British Foreign Secretary Philip Hammond said on Monday he expected sanctions on Iran could start to be lifted as early as Spring next year.

A delegation of 30 representatives of oil, gas and construction industries from South Korea is visiting Iran in hunt for new business opportunities following the conclusion of nuclear talks.

British Foreign Secretary Philip Hammond said in Tehran on Sunday that the UK stance on the Joint Comprehensive Plan of Action (JCPOA) are fully independent of the US.

Iran’s youth volleyball team defeated its Russian rival in a tough match to stand at the third place in FIVB Boys’ U19 World Championship.