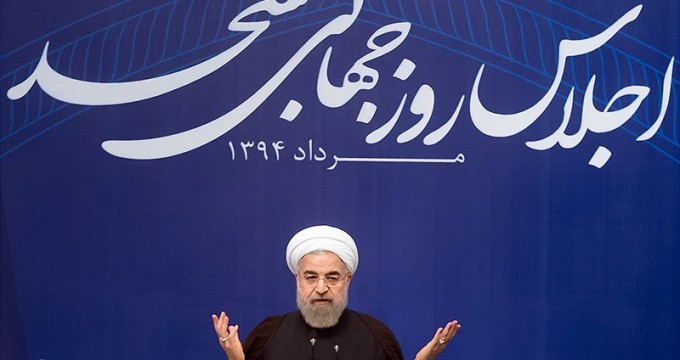 Tehran, Aug 20, IRNA – President Hassan Rouhani on Thursday referred to mosques as places to discuss major social issues as well as regional and international developments and problems of the Islamic world not a place for political parties.

President Rouhani made the remarks while addressing the inaugural ceremony of the conference on World Mosque Day.

Commemorating the occassion, President Rouhani asserted that the bitter memory of the 1969 al-Aqsa Mosque fire would not be forgotten.

‘The al-Aqsa Mosque fire indicates that the Zionist regime not only continues to murder and rape innocent women and children, but it also has no respect for a mosque, the first Qibla of Muslims, (the first direction to which Muslims faced when offering prayers), and a land that is completely respected by other religions as well,’ President Rouhani said.

A numbwer of foreign ambassadors to Tehran as well as a group of the Iranian lawmakers and Friday-prayer leaders were also present in the event.

August 21 marks the anniversary of the 1969 al-Aqsa Mosque fire, the origins of which are still being disputed over 40 years after the incident occurred. The day is titled World Mosque Day in remembrance of the event.