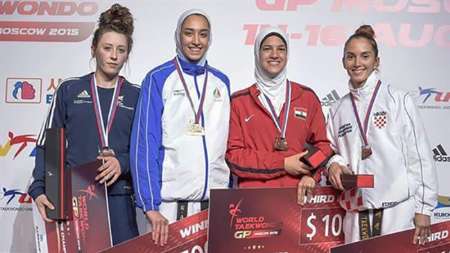 On Sunday, 17-year-old Kimia Alizadeh Zenoorin snatched the gold medal in the women’s minus 57-kilogram weight division after she managed to down her British opponent Jade Jones in the final encounter of the category held at the Dinamo Krylatskoye Gymnasium in northwestern Moscow.

Jones racked up two points in the third and final scheduled rounds and was 3-0 ahead, before the Iranian sportswoman leveled the score at 3-3 with a head kick five seconds from the end.

The result took the contest to a golden point, where Alizadeh emerged triumphant.
The young Iranian athlete had earlier overpowered Taiwanese, British, South Korean and Croatian taekwondo practitioners in her march to the final.

The 2015 WTF World Taekwondo Grand Prix Series 1 opened in the Russian capital of Moscow on August 14, and wrapped up on Sunday.

A total of 50 international referees officiated at the tournament.