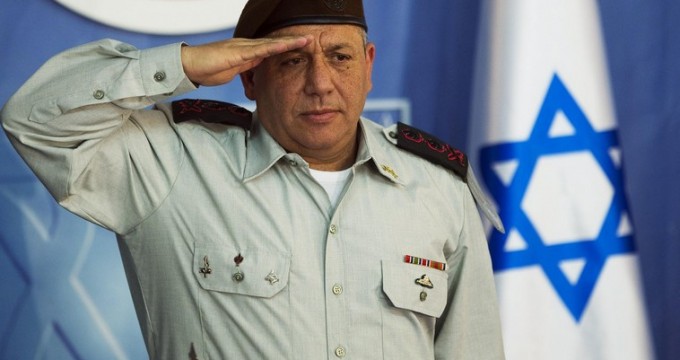 Hezbollah and Hamas are most immediate threats to Israeli security, according to strategic document issued by IDF Chief of Staff Gadi Eisenkot that outlines army plans for next five years.

Israel Defense Forces Chief of Staff Gadi Eizenkot has issued a unique document entitled “IDF Strategy,” which reveals, either overtly or by allusion, the ways in which the Israel Defense Forces plans to build its forces in the coming five years under conditions of severely restricted resources.

The document, which can be seen as Eizenkot’s doctrine, recognizes that the army is subservient not only to the government, but to Israeli civil society and the members of that society who wear the IDF uniform, whose opinions impact the funding available to the military. Within these levels of command, the military doctrine states that “every commander has the possibility and obligation to make decisions during battle that differ from the preliminary planning.”

Contrary to what might be expected of a man who spent 37 years in the army before reaching its top position, Eizenkot is not conservative. He is impatient to make changes and knows how much the army suffers from disciplinary problems and lack of oversight of operational decisions.

And he has no time. In January 2016 the army’s multiyear plan will be implemented, or not, depending on funding. Every branch of the IDF has a brigadier general whose task it is to mark where to slash the budget. The direction being discussed in the Kirya military headquarters’ corridors is slashing a quarter of the staff in units not at the core of military action. A quarter from the rabbinate, a quarter from the Military Advocate General, a quarter from the Education Corps.

The very public dispute between the multiyear plan and the Locker Committee report focuses on the margins, albeit broad margins – pensions and shortening the period of compulsory service in the years ahead. The IDF is vying with the civilian market and other security agencies to hire and keep quality officers. However, generally speaking, Eizenkot not only agrees with most of the Locker Committee’s recommendations, he also contributed to them when he was deputy chief of staff.
But when it comes to the IDF’s strategy there is no place for ambiguity.

In the 1950s and 1960s, the army was built to face an all-out assault by all the countries on Israel’s borders, led by Egypt and assisted by Arab countries that do not have a common border with Israel, headed by Iraq.

After peace with Egypt and Jordan, with Syria next in line as a “failed, disintegrating state” and with nuclear Iran on vacation until 2025, Israel’s main enemies today, according to the document, are the Islamist organizations – Islamic State, but especially Hezbollah and Hamas, although the abilities being developed and their implementation are intended in large part to meet the challenge of battle against armies and states.

Victory, according to the IDF interpretation, means “achieving diplomatic aims set for the battle in a way that will lead to the improvement of the security situation after the conflict.” However, the details of the achievements do not include bringing down Hezbollah in Lebanon or Hamas in Gaza, or long-term control of territories taken over in these arenas.

Eizenkot formulated the IDF Strategy document with the assistance of a team of officers he established in the Operations Branch. A secret version of the document was given to the top brass last month. An unclassified version, with sensitive operational and political details filtered out, was then prepared. That document is important as a binding military concept influenced by the emphases of the current chief of staff, because of its public nature, and as a kind of bond that Eizenkot will have to make good on in the coming conflicts until the end of his term.

In Israel, because the government evades presentation of an overarching strategy, of which military power is only one part, the IDF has figured out what is expected of it. Thus it becomes enmeshed in internal contradictions typical of Israeli policy.

The state’s national objectives, Eizenkot quotes from the 2006 report by the Meridor committee on Israel’s defense doctrine, include “ensuring the existence” of the state, and “protecting the territorial integrity and security of its citizens…”
But what is “territorial integrity,” when the status of the territories occupied by Israel in 1967 is not clear, and how does the refusal to exchange territories for peace conform to “seeking peace with its neighbors”?

Eizenkot has determined that Israel is a “state that seeks peace and to avoid conflicts.” But the word “peace” should be supplanted by the term “status quo.” Thus, “the maintenance of long periods of security calm to allow development of society, science and the economy and improve preparedness for emergency and war; creating deterrence toward the region and elements that could generate threats based on maintaining military might and determination to use it to the full extent when needed …”
Iran is mentioned as supporting Hezbollah and Hamas, not as a nuclear threat. Against “countries without a common border” with Israel, Eizenkot foresees “ongoing, multidisciplinary action,” the purpose of which is “a tangible, limited achievement to deter escalation,” whose main components are intelligence, air action, special forces and other security agencies such as the Mossad.
A basic term in Eizenkot’s doctrine is prioritizing, giving up the pretense of maintaining forces for every possible need. The Eizenkot line is the opposite of the Bar-Lev line on the Suez Canal: not standing outposts between which the enemy can break through, surround and destroy, not desperate defense of every acre, but forces relying on sophisticated means used with flexibility.

Civilians in communities threatened by attack tunnels, or by mortars and rockets, will be evacuated, in which case Hezbollah and Hamas might achieve a symbolic foothold, but they will be ejected, because priority will be given to “depriving the enemy of territorial achievements at the end of the conflict.” There will be no cease-fire until the enemy has been ejected.

Ground forces will be built to “focus on deadliness, mobility and survivability,” and will aspire to “low ratios of wear and tear due to advanced protection systems.” Commanders in the field will be “trained to act quickly when challenged (by assault or abduction), so that a situation is created immediately on the ground that neutralizes obstacles to a ground maneuver and causes the enemy a sense of being pursued but also retreat to the border and prevention of escalation.”

In the northern front, Eizenkot expects the Air Force and other forces to attack “tens of thousands of targets” determined in advance, while in Gaza “the objective of the building of the force is thousands of targets.” In the background, “The costs of the weaponry, intelligence and protection of the IDF are huge in the face of the operational challenge the enemy presents at much lower costs.”

He determines all efforts, tasks, the idea and the interaction between the chief commanders.”
“The political level [the government? The ministerial committee on defense? The defense minister? This was not stated, and not by chance] is to guide the army in dialogue with the chief of staff and in mutual consideration of the goals of the battle and the required end situation, constraints and general context.”