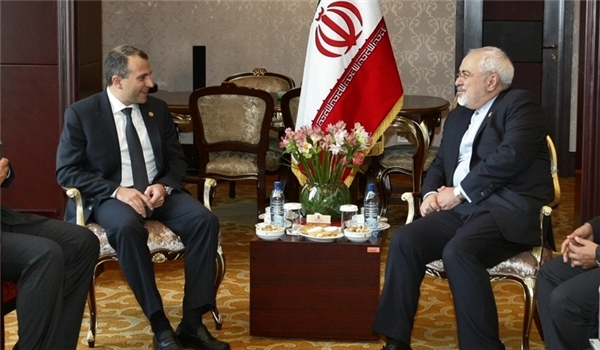 In a Wednesday press conference with his Lebanese counterpart Gebran Bassil in Beirut, Zarif said Lebanon is a symbol of dialogue and constructive interaction among various sects.

The top Iranian diplomat emphasized that the Islamic Republic will always stand by the Lebanese nation, expressing Tehran’s readiness to broaden bilateral relations with Beirut in all domains.

Iran throws its weight behind the Lebanese nation’s resolve to decide its own fate free from foreign meddling, Zarif added.

The Iranian foreign minister further said the recent agreement between Tehran and the P5+1 group on Iran’s nuclear program proved that the country is advocating diplomacy and dialogue rather than confrontation.

Zarif added that Iran has incorporated such logic of dialogue and constructive cooperation in its relations with other countries in the Middle East, saying he submitted a proposal for talks between Iran and six Arab states of the Persian Gulf region during his recent trip to Qatar.

We have always been ready for dialogue with neighbors and there is no obstacle in the way of such talks, said Zarif, adding that such cooperation is needed to fight the rising threat of terrorism in the region.

Iran and the P5+1 countries – the US, France, Britain, Russia and China plus Germany – reached a landmark agreement in Vienna on July 14, ending years of negotiations on Tehran’s nuclear program. Governments in the Middle East and across the world have expressed hope that the breakthrough could set the stage for Iran’s more active engagement in resolving regional problems.

The Lebanese foreign minister, for his part, hailed Iran’s recent diplomatic achievements in the nuclear negotiations, saying the successful outcome of nuclear talks in Vienna was a “victory of diplomatic language and dialogue over the logic of isolation.”

Bassil welcomed Zarif’s proposal for launching a dialogue among regional governments over the issue of extremism and terrorism, saying Lebanon and Iran “are in the same trench in their battle against the danger of terrorism.”

The Iranian foreign minister was in Beirut at the head of a delegation on the first leg of a regional tour, which will see him also visit Syria, India and Pakistan. He has now arrived in the Syrian capital, Damascus, for talks with senior officials of the country.

Earlier in the day, Zarif also held a meeting with Lebanese Parliament Speaker Nabih Berri and discussed the latest efforts made by Lebanon’s political parties to reach consensus on the election of the Arab country’s president.

During the meeting, Berri said that despite lengthy negotiations and political lobbying, the political parties have yet to reach an agreement on who should fill the presidency post.

The top Lebanese lawmaker also expressed hope that the nuclear agreement on the Iranian nuclear issue could facilitate the settlement of  political disputes in the Middle East, saying the agreement could open the doors for new “methods and approaches” in dealing with political issues.

During his two-day trip to Beirut, Zarif sat down for talks with other notable figures, including Lebanese Prime Minister Tammam Salam and Defense Minister Samir Moqbel. He also met with Seyyed Hassan Nasrallah, the leader of the Lebanese resistance movement Hezbollah.