WASHINGTON — President Obama had a tough message for the American Israel Public Affairs Committee, or Aipac, the powerful pro-Israel group that is furiously campaigning against the Iran nuclear accord, when he met with two of its leaders at the White House this week. The president accused Aipac of spending millions of dollars in advertising against the deal and spreading false claims about it, people in the meeting recalled.

So Mr. Obama told the Aipac leaders that he intended to hit back hard.

The next day in a speech at American University, Mr. Obama denounced the deal’s opponents as “lobbyists” doling out millions of dollars to trumpet the same hawkish rhetoric that had led the United States into war with Iraq. The president never mentioned Aipac by name, but his target was unmistakable.

Delegates from Iran and a group of six nations led by the United States in Vienna on Tuesday after agreeing to an accord to significantly limit Tehran’s nuclear ability.Deal Reached on Iran Nuclear Program; Limits on Fuel Would Lessen With TimeJULY 14, 2015
President Obama, at American University on Wednesday, opened a political phase of his campaign for the Iran accord.It’s Either Iran Nuclear Deal or ‘Some Form of War,’ Obama WarnsAUG. 5, 2015
Obama Sends Top Officials to Address Jewish GroupFEB. 26, 2015
Prime Minister Benjamin Netanyahu, appearing before an estimated 16,000 supporters of Israel, characterized the disagreement over Iran as a family fight.Obama and Netanyahu Play Down Rancor on Iran, but Views Still Differ SharplyMARCH 2, 2015
The remarks reflected an unusually sharp rupture between a sitting American president and the most potent pro-Israel lobbying group, which was founded in 1951 a few years after the birth of Israel. 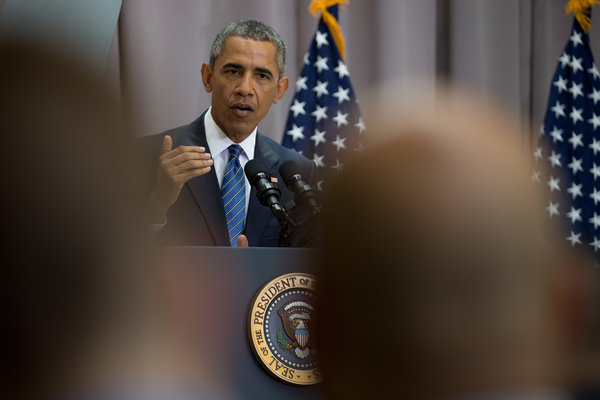 Ronald Reagan opposed Aipac when he defied Israeli objections over the sale of Awacs reconnaissance planes to Saudi Arabia in 1981. A decade later, George H. W. Bush took on the group during a fight over housing loan guarantees for Israel, saying he was just “one lonely little guy” going up against a thousand lobbyists on Capitol Hill.

But the tone of the current dispute is raising concerns among some of Mr. Obama’s allies who say it is a new low in relations between Aipac and the White House. They say they are worried that, in working to counter Aipac’s tactics and discredit its claims about the nuclear accord with Iran, the president has gone overboard in criticizing the group and like-minded opponents of the deal.

“It’s somewhat dangerous, because there’s a kind of a dog whistle here that some people are going to hear as ‘it’s time to go after people,’ and not just rhetorically,” said David Makovsky, a former Middle East adviser for the Obama administration and now an analyst at the Washington Institute for Near East Studies. But Aipac’s claims, he said, had been just as overheated. “There’s almost a bunker mentality on both sides.”

Mr. Obama’s advisers strongly disputed the suggestion that he used coded language to single out Aipac when he said in his American University speech that “many of the same people who argued for the war in Iraq are now making the case against the Iran nuclear deal.”

“This has nothing to do with anybody’s identity; this is a policy difference about the Iranian nuclear program,” said Benjamin J. Rhodes, the deputy national security adviser for strategic communications. “We don’t see this as us versus them,” Mr. Rhodes added, predicting that the White House and Aipac would work closely in the future on other matters, including Israeli security. “This is a family argument, not a permanent rupture.”

But for now, the struggle is critical for Mr. Obama, who regards the agreement — which lifts some sanctions against Iran in exchange for restrictions aimed at restraining its ability to obtain a nuclear weapon — as a landmark achievement. He is fighting to rally enough Democratic support to preserve the deal ahead of a September vote on it in the Republican-led Congress. Aipac is working to deny him that by leaning hard on Democrats, including Senator Chuck Schumer of New York, who on Thursday announced his opposition.

The group had sent 60 activists to Mr. Schumer’s office to lobby him last week, while Citizens for a Nuclear Free Iran, an offshoot Aipac formed to run at least $25 million in advertising against the deal, ran television spots in New York City. As Mr. Schumer deliberated, he spoke with Aipac leaders, but also with representatives of the pro-Israel group J Street, which supports the deal.

The White House courted Mr. Schumer heavily even though officials always suspected he would oppose the agreement, they said Friday. “I don’t know if the administration’s been outlobbied,” Josh Earnest, the White House press secretary, said Thursday before Mr. Schumer’s announcement. “We certainly have been outspent.”

Besides individual meetings with Mr. Obama, Secretary of State John Kerry and Wendy R. Sherman, the chief negotiator, Mr. Schumer had three hourlong meetings with members of the negotiating team, who answered 14 pages of questions from him.

Mr. Schumer hashed out further details with Mr. Kerry, Ms. Sherman and Energy Secretary Ernest J. Moniz in a recent dinner at the State Department. Mr. Obama, in the White House meeting with Aipac leaders, sharply challenged the group after one of its representatives, Lee Rosenberg, a former fund-raising bundler for Mr. Obama’s 2008 campaign, said the administration was characterizing opponents of the deal as warmongers, according to several people present, who would speak about the private meeting only on the condition of anonymity. The meeting included some 20 leaders of other Jewish organizations.

“Words have consequences, especially when it’s authority figures saying them, and it’s not their intent, perhaps, but we know from history that they become manipulated,” said Malcolm Hoenlein, executive vice chairman of the Conference of Presidents of Major American Jewish Organizations, repeating a concern he had raised directly with Mr. Obama during the closed-door session. “Of all political leaders,” Mr. Hoenlein added, “he certainly should be the most sensitive to this.”

Mr. Obama told the visitors he would be careful with his remarks, but quickly pointed out that Aipac was spending $20 million to campaign against the agreement and was sending hundreds of activists to Capitol Hill armed with what he called inaccuracies to persuade lawmakers to reject the deal. He complained about advertising that portrayed him as an appeaser by comparing him to Neville Chamberlain, the British prime minister who signed the Munich Agreement with Adolf Hitler in 1938.

Aipac says it is not behind those ads, and that its arguments with Mr. Obama are about the deal, not him. “This critical national security debate is certainly not about an organization but rather about a deal which we believe will fail to block an Iranian nuclear weapon and will fuel terrorism,” said Marshall Wittmann, an Aipac spokesman. “We hope that all those who are engaged in this debate will avoid questioning motives and employing any ad hominem attacks.”

The friction between Mr. Obama and Aipac over the Iran deal has been building for months. Last week, as Mr. Obama made his way back from Africa on Air Force One, White House officials learned that Aipac would be flying 700 members from across the country to Washington to pressure their members of Congress to reject the deal. Mr. Obama’s team asked to brief the group at the White House, and was told instead to send a representative to the downtown Washington hotel where the activists were gathering before their Capitol Hill visits, according to people familiar with the private discussions.

Ms. Sherman; Adam J. Szubin, the Treasury official who handles financial sanctions; and Denis R. McDonough, the White House chief of staff, all made presentations to the group, but were barred from taking questions to further explain it. White House officials said they were told from the start there would be no questions, while Aipac supporters said that they would have allowed questions but that there was no time.

Whatever the case, Mr. Obama took offense and later complained at the White House to Aipac leaders that they had refused to allow Ms. Sherman and other members of his team to confront the “inaccuracies” being spread about the agreement, leaving him to defend the deal to wavering lawmakers who had been fed misinformation about it.

“You couldn’t miss the message that he was sending,” one person seated at the table said, “of, ‘That’s not O.K. with me, and it will be answered.’ ”

This article was written by Julie Hirschfeld Davis for The New York Times on AUG. 7, 2014