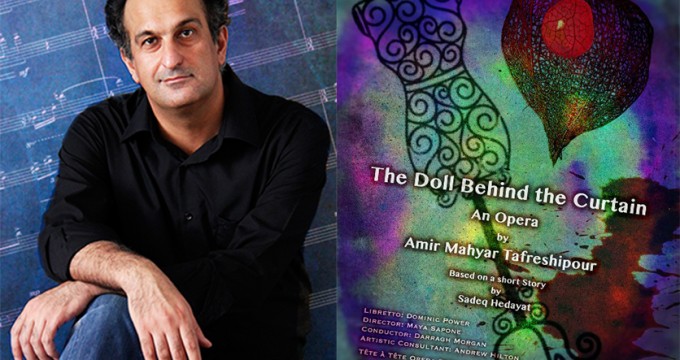 Iranian composer and songwriter Amir-Mahyar Tafreshipour will perform ‘The Doll Behind the Curtain’ at Tête à Tête Opera Festival in London.

An innovative, psychological work of musical theatre, it is the first Iranian opera with an English libretto. A haunting story of an Iranian student’s all-consuming obsession with a beautiful shop mannequin, it explores the dissonance, both musical and cultural, between East and West and tradition and modernity, ISNA reports.
The libretto is taken from a story by celebrated Iranian writer, translator and intellectual, Sadeq Hedayat, with the same title.

“I started working on the composition in 2012. Since then, the opera has been critically appraised and analyzed several times in opera workshops and festivals,” Tafreshipour said.

The opera, conducted by Darragh Morgan and directed by Maya Sapone, will be performed on August 6 and 7.

New Ideas
The 9th edition of the event is underway at King’s Cross Place with more than 100 performances of over 40 new works, and included for the first time an Iranian performance. The festival (July 21-August 9) is renowned for its support to artistic development, nourishing new ideas and driving innovation in opera. In fact, it is the world’s largest festival of new opera.

Tafreshipour received his BMus from the Academy of Music in Esbjerg, Denmark in piano and pedagogy in 2001. In 2003, he got his BMus in composition at Trinity College of Music and in 2004 a master’s at the Guildhall School of Music and Drama in London.

In 2003, he won the first prize at the Biennial Composition for New Music at Tehran University for solo piano. In the same year, he was awarded a Silver Medal for outstanding achievement at Trinity College of Music, presented by the Duke of Kent.

In 2005, he was commissioned by the BBC Symphony Orchestra to compose a harp concerto ‘A Persian Reflection’ under the baton of Pascal Rophe in 2006 in London, featured on BBC Radio 3 in a special program of music from Persia.