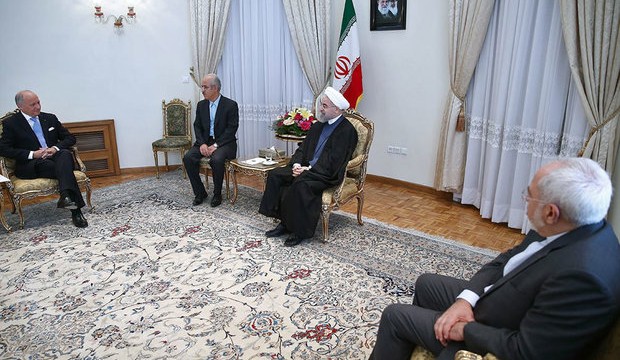 On his arrival in Iraq on Sunday evening, Iran’s Foreign Minister Mohammad Javad Zarif paid a visit to holy cities of Najaf and Karbala and holy shrines of Imam Ali and Imam Hussein. Foreign Minister Mohammad Javad Zarif, who was visiting Iraq on a regional tour, discussed latest regional and international issues by Iraqi counterpart at a meeting held on Monday. A large group of Iranian women took part in a public running event held on the occasion of “Olympic and Women Day”, the fourth day of “Olympic Week” marked in Iran on Tuesday. Iranians early Wednesday gathered at Mehrabad International Airport in Tehran to express their anger at the trip of the French Foreign Minister, Laurent Fabius, to the country.

Iran’s Foreign Minister Mohammad Javad Zarif and his French counterpart Laurent Fabius held a meeting in the Iranian capital of Tehran on Wednesday. The 15th edition of Iran’s Professional League (IPL) kicked off on Thursday as Sepahan of Isfahan and Esteghlal of Tehran football teams began the new season with victory. The National Day of Heroism and Zoorkhane was commemorated by awarding the symbol of heroism to Iranian FM Mohammad Javad Zarif and Head of Iran’s Atomic Energy Organization Ali Akbar Salehi during a ceremony in University of Tehran.