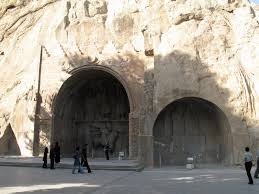 Speaking to ISNA, Alireza Moradi, site manager, said the site’s wells have been filled with water for the past two days.

On July 9, the drying up of Taq Bostan’s springs prompted strong reactions from the general public and officials alike.

The drying up of the wells caused problems for the residents of Taq Bostan Village, who rely on the springs to meet their water needs.

What is certain is that the officials must identify the reason to prevent the recurrence of the problem.

Pointing to Taq Bostan’s 1,700-year history, Kermanshah governor-general, Ebrahim Rezaei Babadi, said efforts are being made to inscribe the complex on the World Heritage List.

“Expert assessment of the problem is necessary,” he said.

On UNESCO’s Tentative List since 2007, Taq Bostan’s chances of receiving world heritage status could suffer as a result of issues such as the drying up of the complex’s springs.

“The drying up of the springs could deal a huge blow to the complex’s chances of inscription on the World Heritage List,” he said.

He dismissed claims attributing the desiccation of the wells to drought, saying: “We grew up in the mountainous regions of Kermanshah and we know exactly why wells dry up in this province.”

Felegari said extracting too much groundwater as a result of illegal well digging is the root cause of the problem and unless steps are taken to remedy the problem, Kermanshah’s tourism will suffer.

Taq Bostan is a Sassanid-era (226 to 650 AD) national heritage site located in the heart of Zagros Mountains, where it has weathered nearly 2,000 years of wind and rain. It boasts beautiful bas-reliefs and a huge basin that was, up until three weeks ago, fed by springs.

The bas-reliefs, some of the finest and best-preserved examples of Persian sculpture under the Sassanids, include representations of the investitures of Ardeshir II (379–383 AD) and Shapur III (383–388 AD).