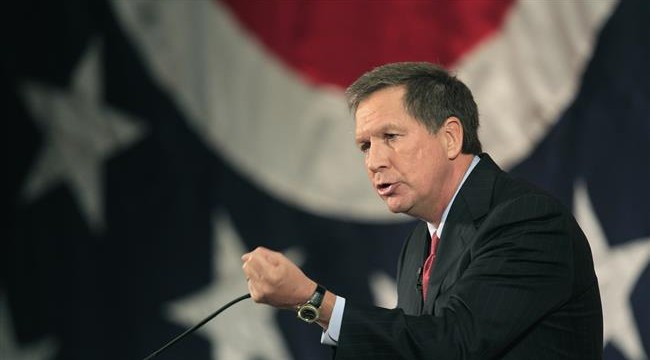 US Republican presidential candidate John Kasich says unlike his rivals, he would not immediately revoke Iran nuclear agreement reached between Iran and the world powers if elected as president.

Kasich made the remarks in an interview with NBC News on Sunday, saying he would wait for Iran to violate its terms before cancelation of the agreement.

“I expect that we’re probably going to see some violations of this agreement. And then the deal gets ripped up and then we’ve got to slap these sanctions back on,” he said.

Rubio said last week that the agreement would not survive beyond the term of President Barack Obama.

“You know what that is? That’s inexperience. That’s just playing to a crowd,” Kasich said in response to questions about whether he’d tear up the deal upon taking office.

Kasich said if he were to be elected president, “everything is on the table” when it comes to how he would handle Iran.

The Ohio Governor separately said he would send US ground troops to the Middle East to fight the ISIL terrorist group.

“You’ve got the air power, but you can’t solve anything just with air power,” he said, apparently referring to Obama’s refusal to send troops on the ground as suggested by many senior military officials.

Since August 2014, a US-led coalition has carried out airstrikes in Iraq and Syria with the aim of “degrading and ultimately destroying” the terrorist group.

The ISIL terrorists, who were initially trained by the CIA in Jordan in 2012 to destabilize the Syrian government, are engaged in crimes against humanity in the areas under their control.