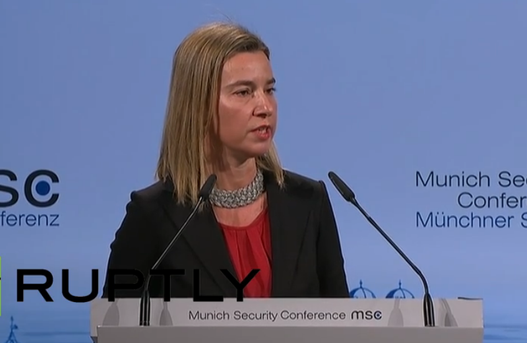 EU foreign policy chief due in Tehran after Riyadh visit

The European Union foreign policy chief has held talks with Saudi officials on the first leg of her first official visit to the Persian Gulf region that will next take her to Iran following the conclusion of nuclear talks between Tehran and the P5+1 group earlier this month.

Federica Mogherini held talks on regional issues with Saudi Foreign Minister Adel al-Jubeir in Riyadh on Monday, and is due to visit the Islamic Republic on Tuesday on her first official tour of the country as the EU’s top diplomat.

She is expected to hold talks in Tehran with her Iranian counterpart Mohammad Javad Zarif and other senior officials of the country.

Mogherini’s visit to the Iranian capital comes after the EU played a leading role in years of Iran’s negotiations with the P5+1 group — Britain, China, France, Russia, the US and Germany.

She has welcomed the nuclear conclusion in Vienna as a “sign of hope for the entire world,” and prior to her Saudi visit, European diplomatic sources were cited in local press reports as saying, “She believes it’s a good deal and should be welcomed.”

On July 14, Iran and the P5+1 countries finalized the text of an agreement, dubbed the Joint Comprehensive Plan of Action (JCPOA), in the Austrian capital city of Vienna.

In a statement released on Friday, over 70 European political, diplomatic and military figures said the July 14 conclusion provides a framework for an end to the Western dispute with Iran over the Islamic Republic’s nuclear program.

The EU statement urged all parties to implement the agreement and called on the international community to throw its weight behind it.

Meanwhile, the European diplomatic sources also stated that there was “a need for a political solution” in Yemen, adding that among the issues Mogherini planned to discuss during her visit to the Saudi and Iranian capitals were the persisting crisis in the war-ravaged country, where the Saudi regime has been engaged in a brutal military campaign, mainly attacking the neighboring nation’s economic infrastructure as well as civilian targets.

The diplomatic sources further added that the EU foreign policy chief would also discuss the crisis in Syria and Iraq, where the foreign-backed ISIL Takfiri terrorists have seized territory and carried out heinous atrocities.