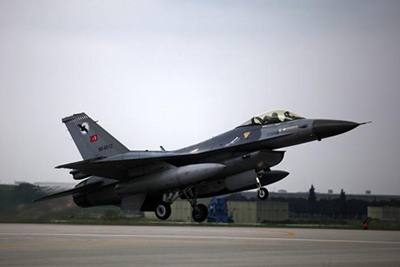 The Turkish government has confirmed that its warplanes have launched attacks on targets inside neighboring Syria said to be the positions of ISIL Takfiri terrorists.

On Friday, a government statement said that three F-16 fighter jets had departed from the Diyarbakir Airbase, located in southeastern Turkey.

The statement also said that the army had used smart bombs to target three positions across the Turkish border province of Kilis, after one of its soldiers was killed in an attack from an area inside Syria.

The decision to launch the aerial attacks was made at a meeting of security officials in Ankara late Thursday chaired by Turkish Prime Minister Ahmet Davutoglu.

“In this context…. an operation was carried out against targets belonging to Daesh (ISIL) inside the Syrian border,” the statement said.

“Three of our F-16s hit… three targets belonging to Daesh,” it said, adding that “the government of the Turkish Republic is determined to take the necessary measures to protect national security.”

The targets, according to an official, who spoke on condition of anonymity, were two command centers and a gathering point of ISIL supporters.

The official claimed that the Turkish jets had not violated Syria’s airspace.

US given Turkish bases for Syria strikes

Meanwhile, Turkey has agreed to allow the United States to use a base in the country’s eastern region to launch airstrikes on Syrian territories.

“Access to Turkish bases such as Incirlik Airbase will increase the coalition’s operational efficiency for such counter-ISIL efforts,” said a US defense official speaking on the condition of anonymity.

Turkish National Council Spokesman Alistair Baskey also said his country and the US had decided to deepen cooperation in the fight against ISIL, after holding “consultations about ways we can further our joint counter-ISIL efforts.”

However, White House spokesman Josh Earnest said he was not allowed to reveal details on the agreement over “specific operations security concerns.”

Turkish media are now referring to the issue as the first direct clashes between Ankara and the Takfiri militants.

On July 22, US President Barack Obama and his Turkish counterpart Recep Tayyip Erdogan announced their agreement to work together in an attempt to secure the Turkish border with Syria and to control the movement of ISIL militants in the region.

The move came after the killing of 32 people in a bomb blast, reportedly claimed by ISIL, which targeted activists planning to help in the reconstruction of the Kurdish Syrian town of Kobani, in the Turkish town of Suruc, on July 20.

Turkey, along with some other regional countries, has been widely accused of supporting the Takfiri militants in Syria as part of a broader Western plot for the overthrow of Syrian President Bashar al-Assad since March 2011.