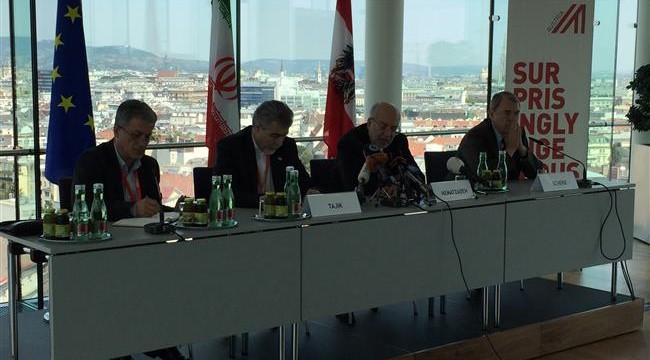 Addressing journalists in Vienna on Thursday at the first Iran-EU trade and investment conference following the conclusion of nuclear talks between Iran and the P5+1, the Iranian minister expressed hope that the conference would be a good start in removing obstacles in the way of business ties between Tehran and Europe.

Asked about Iran’s privatization plans, the minister said according to the law passed by parliament, Iranian companies can be fully privatized. “The only exception would be important industries in which the government can retain a 20 percent share,” he said.

Nematzadeh said the Iranian government is trying to ease the current bureaucracy and has supported a new law passed by parliament to remove obstacles in the way of production and the economy. “The government and parliament are trying to remove all obstacles and to reduce government interference in private investments,” he said.

Rather than giving shares to a certain organisation that may not be qualified at all times, Nematzadeh said, the government is trying to sell shares through public tenders to both Iranian and foreign companies.

When sanctions are removed, he said, there will be more requests from outside the country.

“During the last ten years most of our industrial projects have been privatized and others are in the process of privatization,” he said.

“According to law, the National Iranian Oil Company (NIOC) will not be privatized but other petrochemical or refining industries are going to be privatized,” Nematzadeh said.

The minister said the government is pursuing a new policy to hand over big projects like road and highway constructions to the private sector even if they are half-way done. “The government will support the projects,” he said, “for instance, hospitals will be privately owned but the government will buy services from them,” he explained.

The minister said Iran will work with German, French and Austrian companies in the auto industry. Asked about possible cooperation with General Motors, Nematzadeh said he had heard about American companies contacting Iranian companies but not at the government level. “We have no objections,” he said, adding that such cooperation would probably not come about any time soon due to US-imposed sanctions.

On the new model petroleum contracts, Nematzadeh said the Iranian Ministry of Petroleum will announce its new policies in a special conference both in Iran and Europe soon. He said the new policies are meant to ease certain conditions that existed in the past, adding that there will be room for qualified foreign companies to invest in both off-stream and downstream oil and gas projects.

Asked about the exact amount of Iran’s blocked assets, Nematzadeh said the main reserves that belong to Iran’s Central Bank and not the government amount to about 92 to 100 billion dollars. He added that another 20-25 billion dollars belong to Iran’s National Investment Fund. Nematzadeh said that the money will be used in any government projects but will go to the private sector.

Iran’s Deputy Minister of Petroleum Amir Hossein Zamaninia told Press TV on Thursday that close to 50 projects will be presented in the petrochemical, oil and gas industries.

“The petrochemical industry in Iran is very promising,” Zamaninia said. “They need about 8 billion dollar investment every year and the return of the profit is very attractive,” he added.

The new contract, he said, has been developed under the instruction of Iran’s Oil Minister Bijan Zanganeh in such a way as to do away with some constraints of the buyback agreement.

“It balances the interest of the parties involved, both the Iranian sector, public and private sector, and the foreign company that is engaged in that partnership. It is risk-adjusted and I think when it is presented it will be received pretty well,” Zamaninia said.