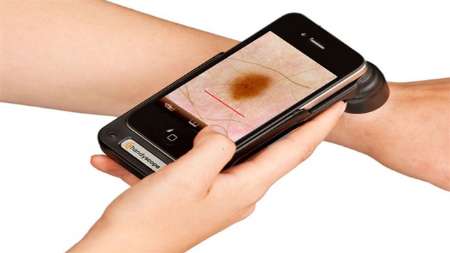 Tehran, July 23, IRNA – An Iranian researcher Maryam Sadeqi along with her colleagues at MetaOptima Company developed a new smartphone to control skin wounds.

Now, here is a device named ‘MoleScope’ that can attach to your smartphone and help detect skin cancer when it is in its initial stage.

The melanoma-detecting device is actually a tiny microscope which attaches to the camera on your phone.

It takes close-up images of moles, sends them to a dedicated analysis platform called the DermEngine, where they are studied by doctors.

If there is a hint of a problem, you will find out straight away.

Developed by Sadeqi during her PhD research several years ago, the MoleScope has finally become a reality.

It operates by using a specially designed app suitable for iOS. It is ideal for keeping track of how moles and skin condition can alter over time.

‘As a patient, I do not have to wait 12 months to use a doctor’s phone or camera to look at my mole. I can do this from home. It enables patients to have access to the same system that doctors have in their clinic,’ Sadeqi was quoted as saying.

Additionally, like many other examples of smartphone-based medical tech, it will be extremely helpful in regions where medical services are less specialized or in places where a skin cancer specialist is not available.

The high quality images indicate the effectiveness of MoleScope.

According to Sadeqi, when the device was being tested, her PhD supervisor was assessing the pictures taken of her own skin and managed to self-diagnose melanoma.

‘We were fortunate that she found it at an early stage,’ she added.