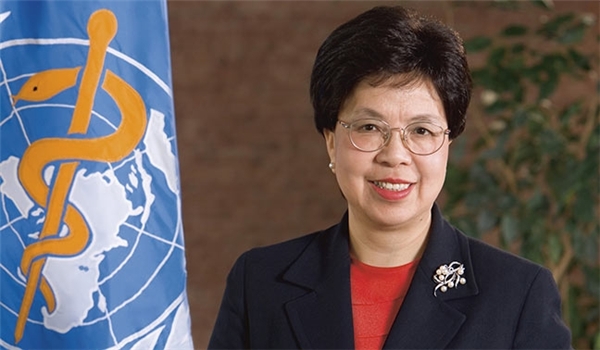 She further praised Iranian President Hassan Rouhani’s attention to the issue of health, and urged other countries to take advantage of Tehran’s experiences in this field.

Chan also said that Iran has “a very high rank in the region” in terms of health standards, adding, “Iran’s achievements, particularly in improving life expectancy and child health, have shown a significant increase.”

WHO chief further criticized anti-Iran sanctions influencing the country’s access to medicine and treatment, and said “health is a right” and medicine should not be embargoed according to WHO laws.

She also appreciated Iran’s serious efforts to help and support the people of Yemen and Syria, saying that Tehran did a great job in showing its solidarity with the people of these countries.

Chan is paying the visit upon a formal invitation by Iran’s health minister. Iran will provide the WHO chief with a report on its latest healthcare measures within the SDG (Sustainable Development Goals).

SDG is part of the Millennium Development Goals (MDGs) which is the world’s time-bound and quantified targets for addressing extreme poverty in its many dimensions – income, poverty, hunger, disease, lack of adequate shelter, and exclusion – while promoting gender equality, education, and environmental sustainability.

During the two-day trip, Chan will assess Iran’s adherence to its political and technical obligations related to the SDG. It is announced that Iran’s experience will be used by the WHO in other countries.