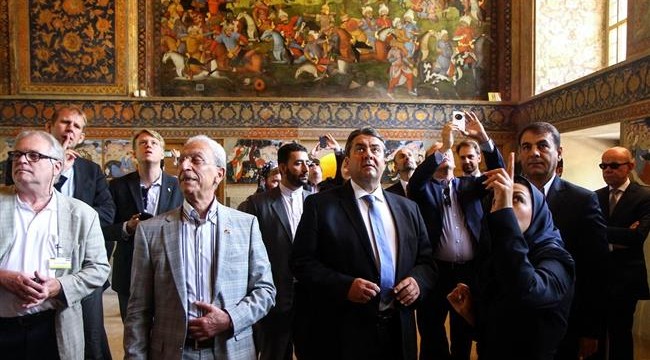 Iran and Germany have discussed expanding banking cooperation which is vital to Tehran’s rehabilitation into the global financial fold from which it was shut off for years under draconian US and European sanctions.

A major achievement of last week’s finalization of nuclear talks for Iran was its restored access to the global financial transfer system called the Society for Worldwide Interbank Financial Telecommunication or SWIFT.

While UN Security Council’s Monday endorsement of the talks virtually marked Iran’s re-integration into the financial society, the country is still likely to face unwarranted hurdles in its cross-border transactions.

German Minister of Economy and Energy Sigmar Gabriel, in Tehran on a landmark visit, and Governor of the Central Bank of Iran Valiollah Seif say a joint committee will intervene to solve out any problem.

“Given that Iranian bank’s re-entry into the German market may entail in certain problems, the joint committee will be able to resolve them quickly,” Seif said.

The governor said Iran and Germany will hold their first joint banking committee meeting in September, attended by representatives of Melli, Mellat, Mine and Industry, and Iran-Europe banks.

Before the sanctions, Iran’s Sepah, Melli and Saderat banks processed transactions between the two countries in cooperation with Germany’s Deutsche Bank and Commerzbank.

Seif described Germany as Iran’s “most reliable trade partner”, saying Tehran seeks to restore economic relations with Berlin to the level before the sanctions, the Mehr news agency reported.

Gabriel said he had brought the best German companies which enjoyed very good relations with Iran for years and tried to maintain those ties even under the sanctions regime, Mehr said.

“We are interested in restoring banking relations with Iran as soon as possible after the removal of the sanctions,” he said.

Gabriel also stressed the need for the two countries to revive the Iran-Germany Economic Commission.

As many as 15 Iranian banks were barred from using SWIFT in an unprecedented political move under US pressure in 2012, which eliminated trade worth some $35 billion with Europe.

The removal of the sanctions will also enable Iran to repatriate as much as $150 billion in frozen assets.