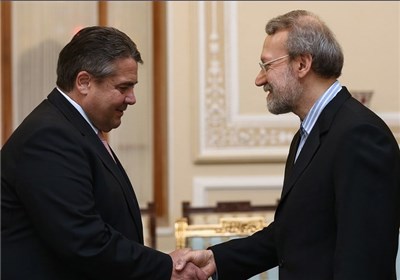 “This (nuclear) agreement can be either a key to cooperation or misused and this depends on the behavior of the Group 5+1 (Russia, China, the US, Britain, France and Germany),” Larijani said in a Monday meeting with German Vice-Chancellor and Minister for Economic Affairs and Energy Sigmar Gabriel in Tehran.

He further emphasized that in case of any misuse of the final text of the Joint Comprehensive Plan of Action (JCPOA) by the West Iran will show a proportionate response.

Iran and the Group 5+1 on July 14 reached a conclusion over the text of a comprehensive 159-page deal on Tehran’s nuclear program.

The text of the comprehensive nuclear deal between Iran and the six powers would terminate all nuclear-related sanctions imposed on Iran after coming into force.

Elsewhere in his remarks, Larijani pointed to the historical ties between Iran and Germany, saying that public opinion in Iran about Germany has always been positive, which can be used for the promotion of political, economic and cultural relations.

Gabriel, for his part, said that the German delegation’s visit to Iran is indicative of the fact that his country is willing to boost ties with Iran.