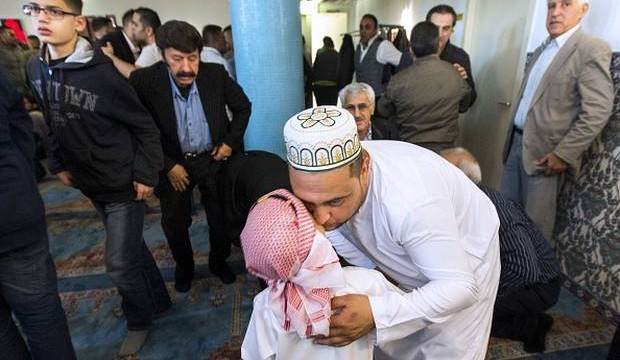 Eid Mubarak: UK joins the world’s Muslims to celebrate the end of Ramadan 2015 with #EidAlFitr

Adhan – the early-morning call-to-prayer – for the world’s almost 1.57 billion Muslims will be that bit extra special this weekend as the kingdom of Saudi Arabia’s Supreme Court declared the sighting of a full-moon last night, signalling an end to Ramadan 2015, as ‘Eid Mubarak’ begins to echo across the globe

Shortly after the announcement, thousands of passengers began clambering onto the roofs of overcrowded trains and onto ferries throughout Bangladesh, hoards of families fought through rail station crowds with their belongings in Jakarta, the Surabaya port in eastern Java came roaring to life, and the vibrantly-coloured buses of Pakistan were almost tilting with the weight of commuters as jubilant families come together to celebrate Eid-ul-Fitr.

Young women take a ‘selfie’ prior to Eid prayers at a park in Manila, Philippines (via TED ALJIBE/AFP/Getty Images)

As President Obama and First Lady Michelle urged the world’s Muslims to remember Ramadan as a time to reflect spiritually, build communally, and aid those in need, Prime Minister David Cameron acknowledged that Ramadan, this year, hasn’t been easy and that we, in Britain, should remember families in Syria and Iraq this Eid as they struggle under ISIL and Assad.