The Iranian top nuclear negotiator has held a late night meeting with his US and EU counterparts as reports have surfaced about a possible pre-dawn announcement on the conclusion of talks.

According to an Associated Press report quoting three diplomats familiar with the talks, a conclusion to the negotiations could be possibly announced early on Tuesday morning Vienna time.

One of the diplomats says the reason for the pre-dawn announcement is that some of the top officials taking part in the talks need to leave Austria’s capital in the morning.

Meanwhile, media outlets said that a photo opportunity for foreign ministers and their negotiating partners was scheduled for midnight GMT but later reported that such an event was unlikely. 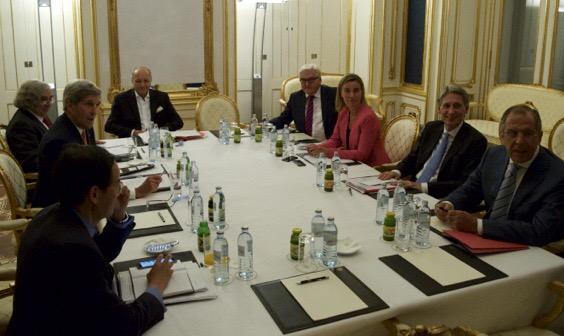 Mogherini’s spokesperson Catherine Ray tweeted this photo of the ministerial coordination meeting of the P5+1 group of countries.

Catherine Ray, Mogherini’s spokesperson, has tweeted, “Hearing all kind of unfounded rumors on schedule of the night. Media will be informed in due time through official channels.” Kerry’s adviser Marie Harf retweeted the post.

According to Ray, senior negotiators of the P5+1 group are currently in a ministerial coordination meeting, which will reportedly be followed by a meeting with the Iranian team.

After missing several deadlines, foreign ministers from the P5+1, which comprises the United States, Britain, France, Russia and China – plus Germany, and Iran are making last-ditch efforts in the Austrian capital to arrive at a conclusion over Tehran’s nuclear program.