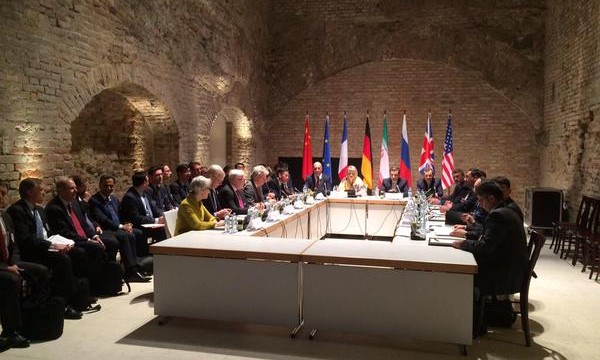 TEHRAN (FNA)- A senior MP dismissed western media reports that Tehran and Group 5+1 (the US, Russia, China, France and Britain plus Germany) are due to reach a provisional agreement to be sent to the capitals for review before its final approval, saying that the claim is a new ploy by the West and Israel.

“Sending the agreement to the capitals before being signed by the negotiating teams in Vienna is a new game by the westerners in the negotiations, and this idea has, in fact, been injected into Obama’s mind by Mrs. (Condoleezza) Rice; we will never be deceived by the westerners and the Zionists,” Orumieh (in Northwestern Iran) MP Nader Qazipour told FNA on Sunday.

Qazipour’s remarks came after the Associated Press reported that the diplomats say negotiators at the Iran nuclear talks are expected to reach a provisional agreement Sunday.

AP quoted two diplomats, who asked to remain anonymous, at the talks as saying that the envisioned accord will be sent to capitals for review and, barring last-minute objections, be announced on Monday.

The lawmaker reiterated that the Iranian negotiators have been vested with full authority to make the final decision.

He noted that the Americans need the agreement more than Iran does and the change in their behavior in the final stages is because they want to take concessions from Iran, “but they should know that Tehran will give no more privilege to anyone”.

A source close to the nuclear negotiations in Vienna had also earlier today rejected the AP report, saying, “Iran’s negotiating team has sufficient authority for striking an agreement with the G5+1 in case of abiding by the redlines.”The source reiterated that only an agreement is acceptable for Tehran that is based on the Islamic System’s redlines.

The source reminded the Iranian parliament’s law on protecting the country’s nuclear rights and achievements that was signed by President Rouhani for implementation by his government earlier today, and said the legislature should, at least, supervise the precise and proper implementation of the final deal if it is struck and due to the same reason, it should be informed of the deal.

“Yet”, he said, “the team has been vested with full authority to accept or reject the deal in Vienna, and what the parliament will do later is a formal procedure for turning it into a law.”

“According to the Joint Comprehensive Plan of Action, all sanctions against Iran are terminated and Iran will no more be recognized as a sanctioned nation,” the source said, and added, “The JCPA only envisages a set of temporary restrictions that will be removed after a limited and logical period of time, as stated earlier by the Iranian Supreme Leader.”

“All economic, financial and banking sanctions against Iran will be terminated for good on day one after the endorsement of the deal, again as the Iranian Supreme Leader has demanded.”

“Iran will no more be under any arms embargo, and according to a UN Security Council resolution that will be issued on the day when the deal is signed by the seven states, all arms embargos against Iran will be terminated, while its annex keeps some temporary restrictions on Iran for a limited period,” the source disclosed.

He said the JCPA is, in fact, a collection of multiple agreements that all fall within the redlines specified by the Iranian Supreme Leader Ayatollah Seyed Ali Khamenei, and includes a set of temporary and limited measures that will remain valid for different periods of time.

“The upcoming UN Security Council resolution – that will call all the previous five resolutions against Iran null and void – will be the last resolution to be issued on Iran’s nuclear program and withdraws Iran’s nuclear dossier from under Chapter 7 of the UN Charter. This last resolution will remain valid and will be implemented for a specifically limited period of time and will then automatically end at the end of this period,” the source added.

“This is the first time that a nation subject to Chapter 7 of the UN Charter has managed to end its case and stop being subject to this chapter through active diplomacy,” he concluded.