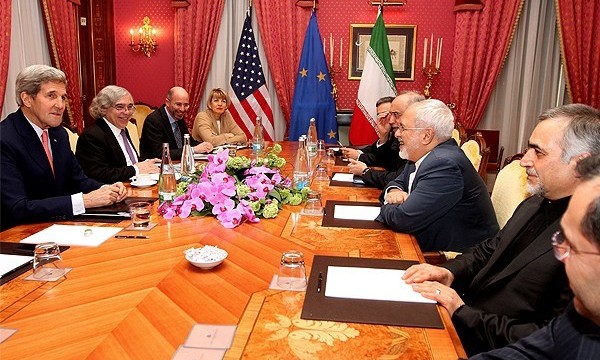 The United States is making demands on Iran that are not related to these ongoing nuclear negotiations between Tehran and the P5+1 group of countries, an American political activist and commentator says.

Mark Glenn, a writer and co-founder of the Crescent and Cross Solidarity Movement, made the comments in an interview with Press TV on Saturday when asked about remarks by US Secretary of State John Kerry who said on Friday “we have resolved some of the things that were outstanding and we’ve made some progress.”

The only reason is that “the United States is making demands upon Iran that have nothing whatsoever to do with these nuclear issues, but rather over issues that the United States would like to see Iran opening up her doors to American and Western influence,” he stated.

“When I read the statement from Kerry, saying that certain issues have been resolved, the way that I read that first and foremost is that this is just more theatricalism, it’s more Hollywoodism.”

“But again, I think that the bigger question is what are these issues, are they the issues dealing with Iran opening up her military sites for inspection, or Iran opening up her political process to allow the United States to go in to create social havoc as the United States has done in countries such as Egypt and Syria and other places,” he stated.

“In the end, is this going to work out for Iran’s benefits or for the benefit of the United States and Israel?” he asked.

He also said that “the negotiation deadline will be extended because I think that Obama and his team want to get as much out of this as possible and that means that they have to extend the deadline and they will.”

Iran and the P5+1 countries – the United States, Britain, France, Russia, China and Germany – have been engaged in crucial talks in the Austrian capital, Vienna, towards reaching a landmark agreement over Tehran’s nuclear energy program.

The negotiating sides missed an initial deadline of June 30 and all parties agreed on a new July 7 deadline. Now it seems that negotiations will continue at least until Monday.