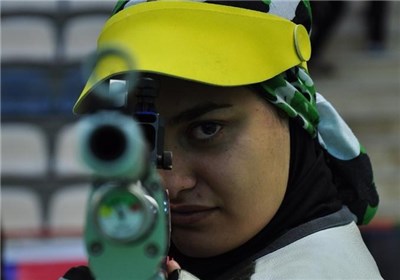 Iranian female sports shooter Najmeh Khedmati has snatched a gold medal after putting on an awe-inspiring display of skills at the 28th edition of Universiade currently being held in South Korea.

On Sunday, the 19-year-old 2014 Asian Games gold medalist scored 206.6 in the P2 (women’s 10m Air Pistol) and topped the podium at the Jeollanamdo Shooting Range in the city of Naju, situated 285 kilometers south of the capital, Seoul.

Gabriela Vognarova from the Czech Republic finished in second place with 205.7 points and claimed a silver medal. Serbian athlete Ivana Maksimovic amassed 184.3 points to pick up the bronze.

The 2015 Summer Universiade, which marks the 28th edition of the tournament, opened in the South Korean city of Gwangju on July 3, and will run until July 14.

Student athletes from over 170 countries are competing in the championships.

The Universiade is an international sporting and cultural festival, which is staged every two years. It is only second to the Olympic Games.

The previous edition of the Universiade was held in the Russian city of Kazan. Over 10,400 university athletes from 162 countries participated in 13 mandatory and 14 optional sports, making the 2013 Universiade the biggest ever in the history of the event.