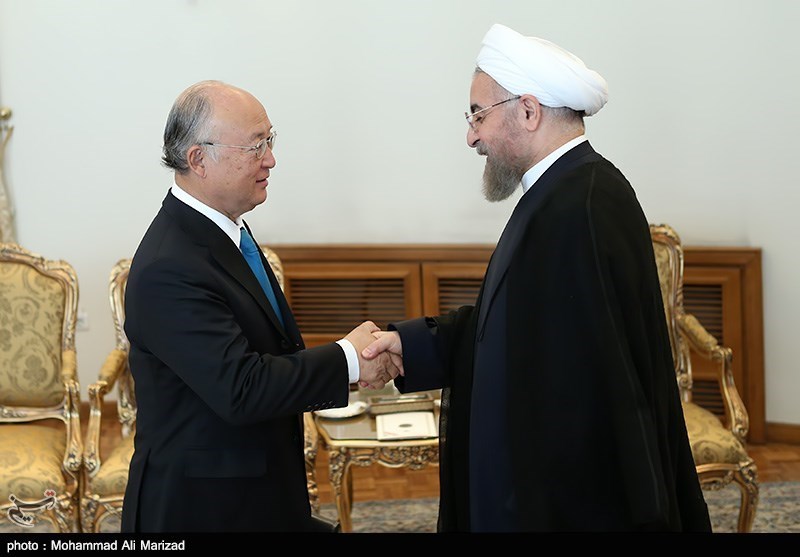 IAEA’s chief Amano due in Iran Thursday for nuclear talks

Director General of the International Atomic Energy Agency (IAEA) Yukiya Amano is due in Iran on Thursday for talks on Tehran’s nuclear program.

Leader of the Islamic Revolution Ayatollah Seyyed Ali Khamenei has instructed the Iranian president to boost the country’s defense and deterrence capabilities.

Experts from Iran and the Group 5+1 (Russia, China, the US, Britain, France and Germany) have reportedly concluded drafting the text of a possible final agreement over Tehran’s nuclear energy program, a source close to the Iranian team of negotiators announced.

Senior negotiator: Iran not ready to pay any price for final N. deal

Iranian Deputy Foreign Minister and senior negotiator Seyed Abbas Araqchi underlined that Tehran seeks attainment of a good comprehensive agreement with the world powers but is not ready to pay any price for it.

Iran not to let anyone enter its military sites: Negotiator

A senior Iranian nuclear negotiator reiterated on Wednesday that Tehran will not permit anybody to enter and inspect its military sites under the guise of the Additional Protocol (AP) of the Nuclear Non-Proliferation Treaty (NPT).

Iranian President’s Chief of Staff Mohammad Nahavandian underlined that the adverse effects of Western economic sanctions imposed against the Islamic Republic has not been limited to the country.

The European Union has extended a freeze on sanctions imposed against Iran over its nuclear program by one week as intensive negotiations continue between Tehran and the P5+1 group of countries for a final deal.